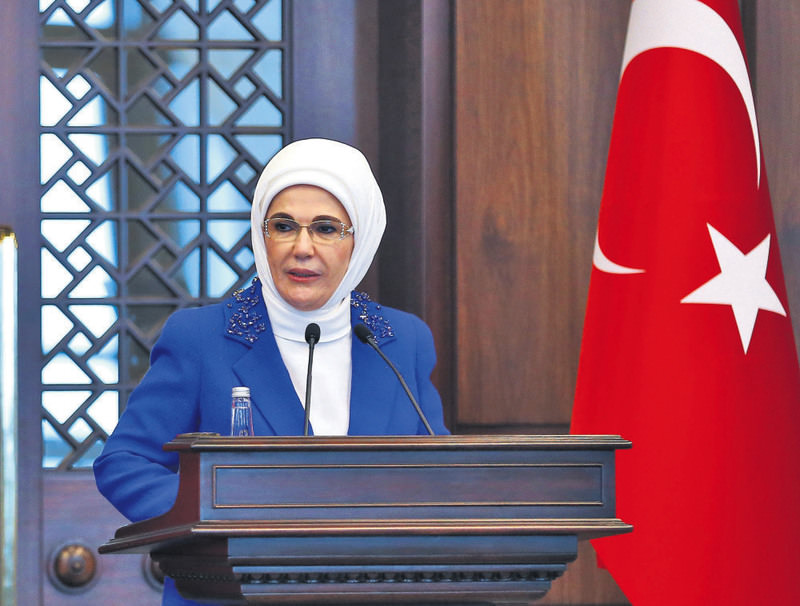 by Daily Sabah with AA Dec 17, 2015 12:00 am
First Lady Emine Erdoğan hosted the spouses of foreign ambassadors in Turkey yesterday at the Presidential Palace for a lunch. Mrs. Erdoğan said she believed the event she describes as "gathering of hearts" might help jumpstart a peace bid, adding: "if the war is started by others, we can begin the peace."

Her address to the audience focused on Islamophobia she branded as "accusations against more than 1 billion Muslims because of [the crimes] of a few individuals." "It is a crime to associate a religion of peace with violence and terror. It is a crime against other religions as well and a betrayal to the legacy of the prophets İsa [Jesus] and Musa [Moses]," Erdoğan said, noting she was deeply hurt that Islam is associated with terror and violence. "We have no place among us for those aiming to reach their own earthly goals by using the name of Islam. A genuine Muslim does not support terrorism," she said.

Erdoğan said ambassadors are "custodians of a country's honor and values" and their spouses were "links in the chain of friendship and peace." "Our tradition says ambassadors are a nation's guests and this is how our international relations are shaped. It is a great pleasure for us to make you feel at home," Erdoğan told the audience. "We should do our best to spread a civilized understanding based on respecting each other's values and engaging in more dialogue," she said.

Speaking about the influx of refugees into Turkey, Erdoğan said her country is faced with a great burden it cannot shoulder alone. "We wish we can make millions [of refugees] as comfortable as they are in their own homes but our resources are limited. We expect the West, especially Europe, to adopt a more humanitarian, a more conscious approach to this matter. It is not a Kurdish, Arab or refugee issue. It is a humanitarian issue, and the only solution is a humanitarian one. Humanitarian diplomacy should be the key in international relations, as diplomacy without love means relations are strictly hypocritical," she said.

The first lady also said that women have an important role to play in a world fraught with constant tensions, adding that women can help spread the "globalization of peace, justice and fraternity." She stressed last month's summit of the G20 leaders, hosted by Turkey and marking the creation of the Women-20 (W20) group, was "a development that will benefit women by placing them more in decision-making mechanisms and help them to make a difference in politics, the economy and other fields."

She stressed that Turkey is a country that "institutionalized goodness" with its humanitarian work across the world. "We have our own ambassadors of goodwill. Our institutions, primarily the Turkish Cooperation and Development Agency (TİKA), reach out to children from the Balkans to Africa and help people get vocational training. We also cooperate with the first ladies of other countries on humanitarian work," she said.

Erdoğan called on the spouses of ambassadors to act "as ambassadors of the heart." "Turkey has much cultural and historic experience as the cradle of the oldest civilizations in the world, and it would like to share it with the world. You can be especially instrumental in advising the youth of your country to gain insight from this experience," she told the audience.
Last Update: Dec 17, 2015 1:11 am
RELATED TOPICS