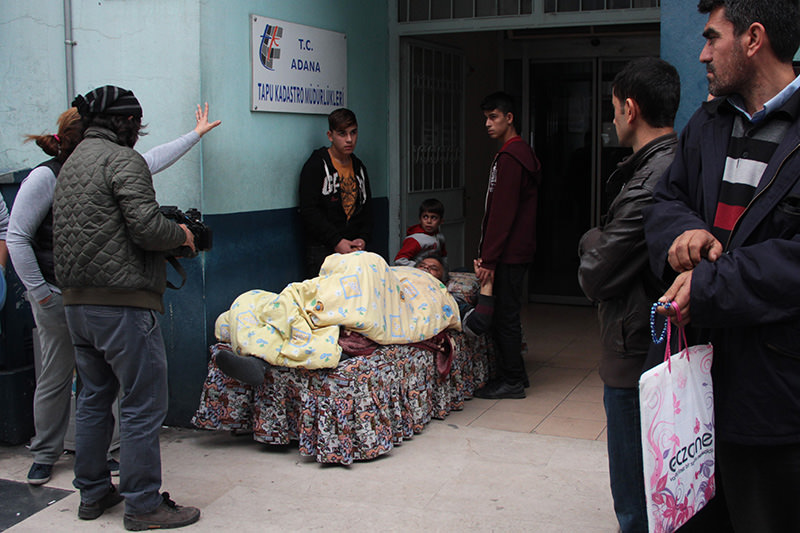 | IHA photo
by Daily Sabah Dec 17, 2015 12:00 am
A man in Turkey's southern province of Adana was taken to the General Directorate of Land Registry and Cadaster on Thursday lying down in bed due to a pain in his back.

The man named Niyasi Olgun reportedly told the journalists that his friends had put him in the back of lorry, the only way he could come to the directorate so as to get his share from the sale of a piece of land that was left in an inheritance from his grandfather.

Members of Olgun family were at the local office of the General Directorate of Land Registry and Cadaster, known as "Tapu Kadastro" in Turkish, to realize the sale of an inherited land. Niyasi Olgun, however had a difficulty standing, which would have had jeopardized his attendance to the transaction were it not for his robust determination. Niyasi asked his friends to take him the land registry office in bed, while being wrapped in duvet.

Niyasi Olgun reportedly said, "I had a small share in the inheritance. I came covered in duvet since it was cold outside."

After the officials took Niyasi's signature to close the sale of the property, he was sent home, on the back of the lorry.

One of the duties of the General Directorate of Land Registry and Cadaster in Turkey is to perform all kinds of contractual and non-contractual transactions related to land registry and register of immovable properties.
Last Update: Dec 17, 2015 12:34 pm
RELATED TOPICS