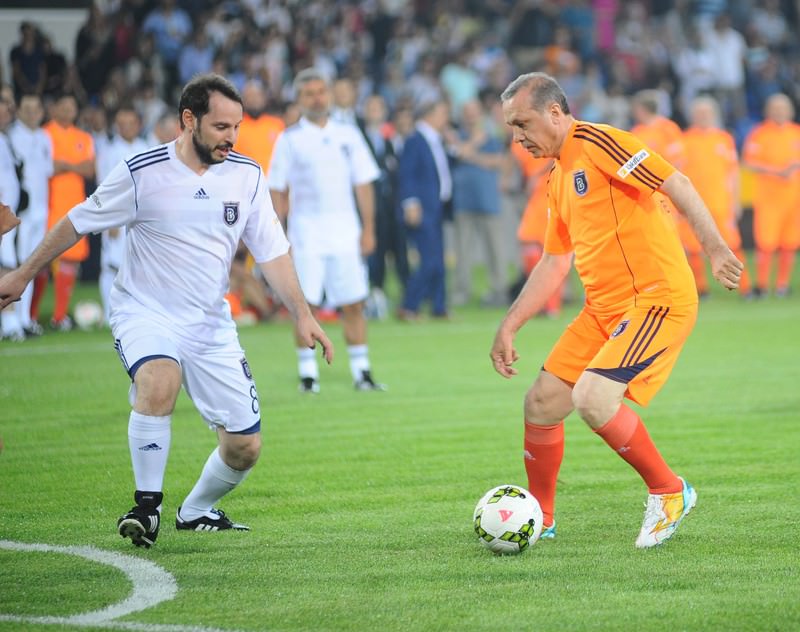 by Daily Sabah with Wires Dec 18, 2015 12:00 am
President Recep Tayyip Erdoğan, a former semi-professional football player, will return to the pitch again on Monday when he inaugurates a state-of-the-art stadium in northwestern Turkey.

Erdoğan, 61, who last played in a football game last year during his tenure as prime minister, will attend a ceremonial match in Bursa, the city's mayor, Recep Altepe, told Turkish media. Though the presidency did not confirm his participation in the match, he will join former professional players in the match if he chooses to play, Altepe told Doğan News Agency. Erdoğan had inaugurated another stadium in Istanbul In June 2014 by playing a ceremonial match with a team of celebrities, including former football star Rıdvan Dilmen, NBA star Hidayet Türkoğlu, TV personalities and high-ranking officials in a team coached by National Team coach Fatih Terim. Erdoğan's hat-trick in the game helped his Orange Team to win 9-4.

Erdoğan was interested in football in his youth and received his first official license at the age of 15. After brief stints with several small Istanbul teams, he was transferred by the İETT, the football club of Istanbul's mass transit authority which he joined as both an employee and a player. He was reportedly on the transfer list of major Istanbul club Fenerbahçe, but did not make the switch to professional football due to his father's objections. He ended his 15-year football career in 1982.

The stadium, home of Bursaspor, 14th in Turkey's Süper Lig, owes its existence in its current location partly to Erdoğan, according to Altepe, who said he advised them to build the stadium somewhere else instead of on the site of the old stadium.
Last Update: Dec 18, 2015 1:51 am
RELATED TOPICS