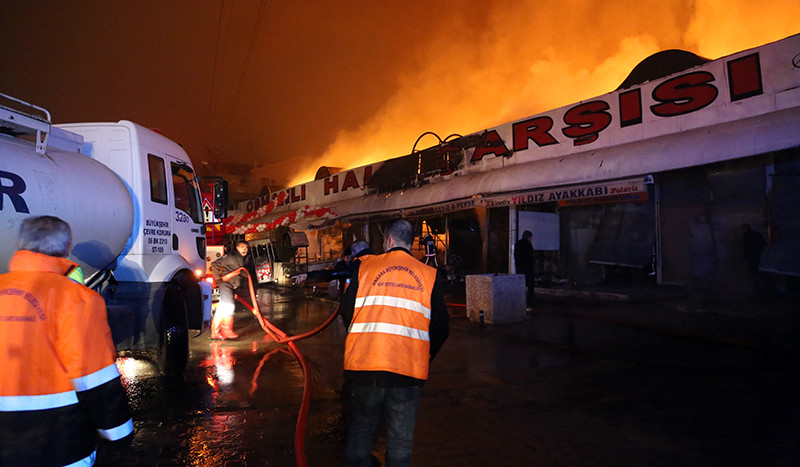 | AA Photo
by Daily Sabah Dec 20, 2015 12:00 am
A shopping center with 250 stores in Ankara burned down on Sunday. According to reports, the fire at the Osmanlı Public Bazaar located in the Pınarbaşı neighborhood of Ankara's Keçiören province began at 4:30 in the morning. The fire department sent 35 vehicles and 108 personnel to the scene, to try and stop the fire from spreading but failed to save the center.

Teary-eyed store owners rushed to the scene, witnessing the destruction of their life's work. Police officers had to stop many business owners as they tried to save their property. Several people broke into a pet shop located in the mall in an attempt to save the animals but the firemen would not allow anyone on the premises due to danger.

Ankara's Metropolitan Municipality Fire Department Manager Celil Sipahi said firemen arrived at the scene five to six minutes after being alerted, and prevented the fire from spreading to residential areas nearby. Sipahi said the cooling process is ongoing, but no one was injured in the blaze, adding that preliminary investigations revealed that the cause may have been a short-circuited cable.

An unidentified local whose home is situated next to the center said the fire was incredible, describing the burning down of the mall as a huge loss for the neighborhood.

Salih Çetin, who owned two stores in the mall, said: "We built this mall in 1992 and watched it develop over the years. I received a call at 5:00 a.m. When we arrived, we saw fire engulfing the entire mall. We don't know how this happened."