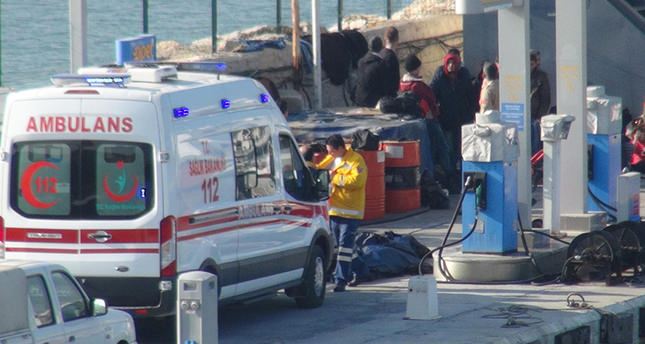 by Compiled from Wire Services Dec 22, 2015 12:00 am
Twelve migrants including four children drowned when a boat carrying at least 20 capsized off Turkey's Aegean Sea coast on Tuesday. The nationalities of the victims were unknown, though they are said to be from Syria where a 4-year-old conflict has displaced millions.

Migrants had departed from Kuşadası, a town in the western province of Aydın, when their boat capsized en route to a nearby Greek island of Samos for an unknown reason. Seven migrants were recovered from the sea by a Coast Guard boat patrolling the area while bodies were picked up by Coast Guard officials. Search and rescue work was underway after the incident under the likelihood that other migrant boats in the area had also capsized. Security forces detained 87 Syrian migrants in the towns of Kuşadası and Söke on Tuesday as they were about to set sail to Greece.

On Dec. 18, data from the International Organization for Migration (IOM) revealed that 706 people have died in the Aegean Sea this year as they attempted to cross into Europe while more than 801,000 people managed to reach Europe via the Aegean Sea in an unprecedented influx.

With winter setting in, a grim situation awaits migrants trying to go to Europe. Travel by sea is the easiest, yet deadliest way to reach Europe from Turkey. Huddled aboard unsafe boats, the migrants' journey, which stretches only a few kilometers between the Turkish coast of the Aegean Sea and the Greek islands, is more difficult than they think. More often than not, boats, not resistant to severe weather and overcrowding, capsize or sink, killing their occupants.

Syria is the biggest culprit, causing the influx of new refugees and internal displacement, according to a United Nations report, with a refugee population of 4.2 million by mid-2015, far higher than the 20,000 at the end of 2010, months after an uprising started in the country.

Figures supplied by Turkish authorities show the number of intercepted migrants increased 70 times in the past five years with Syrians topping the list of migrants. As of Dec. 8, 63,535 Syrians were intercepted or rescued by the Coast Guard, followed by 18,238 Afghans.