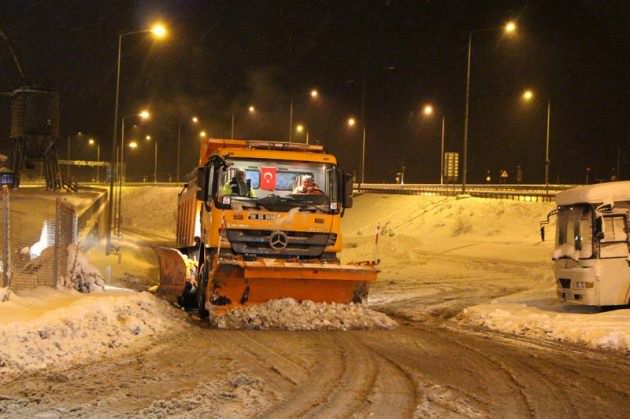 | IHA photo
by daily sabah Jan 01, 2016 12:00 am
The Minister of Transport, Maritime Affairs and Communications Binali Yıldırım, entered the new year on the Bolu mountain road - which connects Istanbul to Ankara and eastern Anatolia - together with workers who were clearing snow off the road for safety purposes.

The minister assisted the workers and cleared the snow on the road by using a snowplow, after which he treated the workers with Baklava- a rich, sweet pastry that is characteristic of Turkish cuisine.

A cold snap and snowfall have hit many provinces across Turkey, disrupting daily life and leading to closure of roads. Dozens of vehicles also have been stranded on the highways due to icy conditions.

Yıldırım warned drivers not to overtake other vehicles on the roads, and to be extra careful, since the roads are slippery than usual. He told the reporters on New Year's eve: "Let's not forget, there is no king of the roads, but instead, there are rules of the roads. Please abide by the rules, so that you do not upset your beloved ones and get home safely."

The minister then dined with the highway personnel, and later paid a visitto the control center responsible from road traffic on the Mount Bolu Tunnel, a 3.1 km long highway tunnel constructed through the Bolu Mountain between the Düzce province and Yumrukaya district in Bolu. The minister here announced a message through loudspeakers at the Tunnel, celebrating the passengers' New Year's.
Last Update: Jan 01, 2016 6:36 pm
RELATED TOPICS