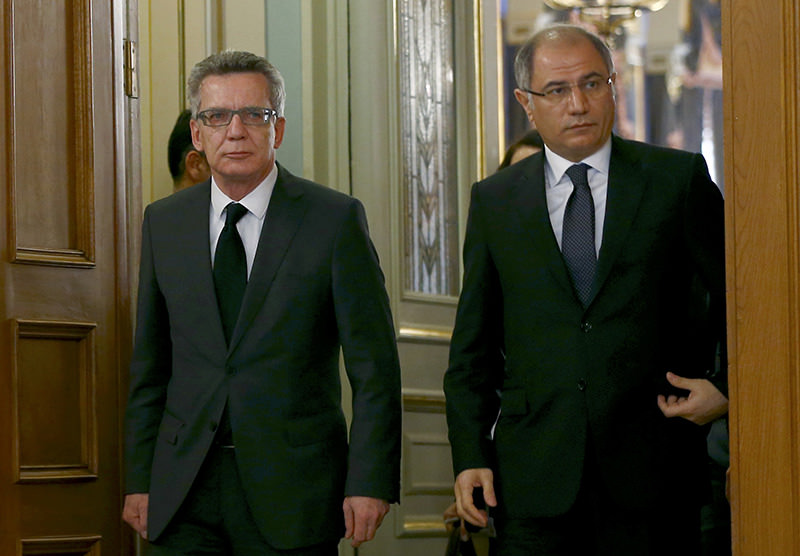 Efkan Ala (R), Thomas De Maiziere (L) in Istanbul, Turkey Jan 13, 2016 (Reuters)
by daily sabah Jan 13, 2016 12:00 am
A suspect regarding the Istanbul suicide bomb attack was detained on Tuesday night, Turkey's Minister of Interior Affairs Efkan Ala said during a joint press conference with his German counterpart Thomas de Maiziere in Istanbul, but did not provide further details.

The Turkish minister also said that the suicide bomber was not amongst the police's list of targets being monitored.

Thomas de Maiziere flew to Istanbul on Wednesday following a suicide bomb attack that killed 10 people, eight of whom were German citizens.

De Maiziere visited the site of the attack and then conferred with Turkish officials, which was then followed by a press conference with his Turkish counterpart.

The assault took place in Istanbul's Sultanahmet Square early on Tuesday. The city's governorate shortly after released a statement, saying that 10 were killed and 15 injured in the blast.

During Wednesday's press conference, Interior Minister Efkan Ala said that his German counterpart's visit to Istanbul was an indicator of Turkey and Germany's cooperation in terrorism.

"Turkey has detained 3,318 suspects linked to Daesh or any radical terror organization so far [since the beginning of the Syrian war]; 847 of those detained have been arrested and most of the detainees are foreigners," Ala said.

According to Ala, 220 suspected Daesh members were detained across Turkey a week before the Tuesday's attack in Istanbul. "I call on all countries to work closely against any terrorist organization," he added.

"2,894 foreign national suspects have been deported from Turkey," Ala stated, confirming previous statements made by Turkish officials that the suicide bomber was not among the police's list of suspects.

On Tuesday, Deputy Prime Minister Numan Kurtulmuş said in a live TV press conference that the blast was done by a male Syrian suicide bomber born in 1988. Later in the day, Prime Minister Ahmet Davutoğlu held a live press conference, during which he said the assailant was a member of the Daesh terror organization.

German Minister Maiziere said during Wednesday's press conference that officials do not currently have concrete information on whether the attack was targeted against German citizens, and suggested that whoever would like to visit Turkey, should be at ease.

According to a news report published later on the in day by the Associated Press (AP), Germany has sent a team of specialist investigators to Istanbul.

A spokesman for the Interior Ministry reportedly said that the investigators flew to the Turkish metropolis Wednesday.