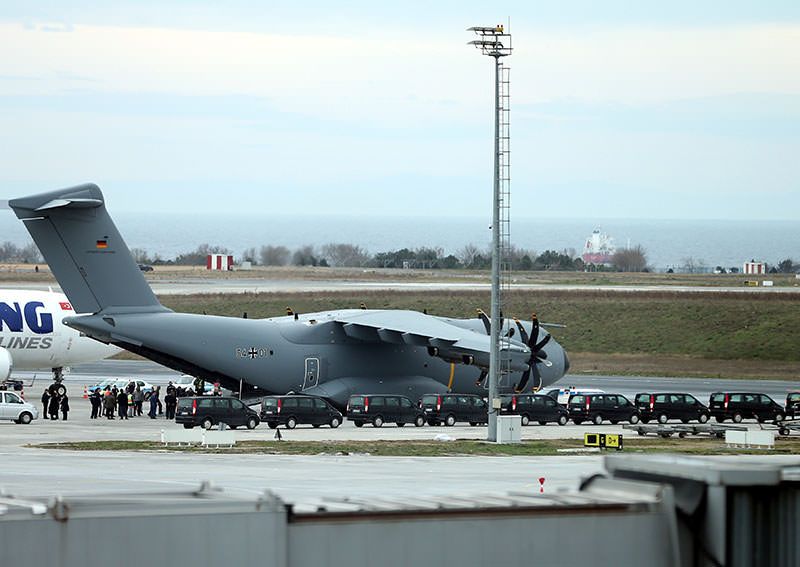 | AA photo
by Daily Sabah with Wires Jan 16, 2016 12:00 am
The remains of 10 Germans killed in Tuesday's Istanbul suicide attack, were flown home on Saturday.

The bodies of those killed in Tuesday's attack, which has been blamed on the Daesh terrorist group, were put on a plane at Atatürk International Airport to be flown back to Germany for burial.

Another 17 people, mostly German tourists, were wounded in the attack in the blast.

Seven suspects have been detained in connection with the attacks, Interior Minister Efkan Ala said Thursday.

Turkish authorities have identified the Istanbul suicide bomber as a 28-year-old Syrian who entered Turkey on January 5 posing as a migrant fleeing the country's civil war. Prime Minister Ahmet Davutoğlu said the man was a member of Daesh.

Turkey is currently hosting around 2.2 million refugees who have fled the fighting in Syria. Davutoğlu warned against migrants as potential extremists, which he said would be playing into the hands of the "terrorists".

Turkey was hit by three attacks blamed on Daesh in 2015, including a double suicide bombing in October in Ankara that killed 103 people, the country's worst-ever attack.

Turkey is one of the world's most popular tourist destinations, visited by more than 35 million people a year, and the industry is one of the most important sectors of the Turkish economy.

Interior Minister Efkan Ala said last week that tourists should not give into fear and carry on as normal. "We have taken necessary security measures," he said in a Wednesday news conference. "There is no reason to be worried."

German Interior Minister Thomas De Maiziere said after the attacks that there was no reason for German nationals not to travel to Turkey.
Last Update: Jan 16, 2016 4:02 pm
RELATED TOPICS