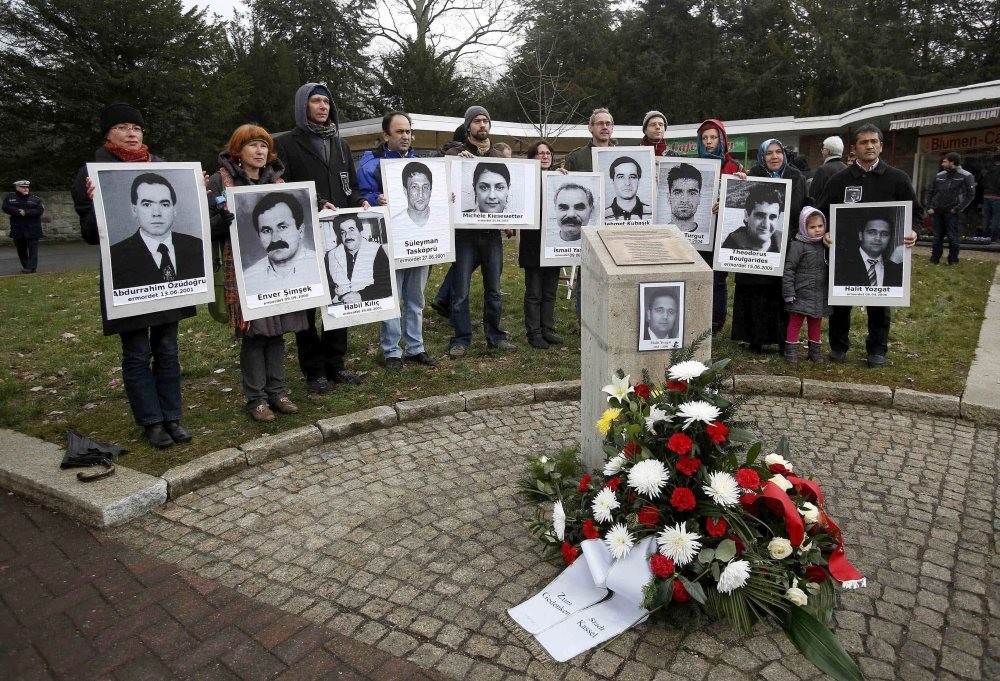 People carrying photos of NSU victims stand around a monument erected in memory of Halit Yozgat, one of the victims, in Germany's Kassel. Amnesty says ,institutional racism, led police to downplay racist motives behind the murders.
by Daily Sabah with Reuters Jun 10, 2016 12:00 am

Amnesty International released a scathing report on Thursday condemning Germany's failure to tackle hate crimes even before the influx of refugees, and said botched probes into the murder of Turks by the neo-Nazi NSU gang showed shortcomings in the fight against racist violence and "institutional racism"

For migrants, Germany nowadays is remembered for a string of attacks against asylum homes, rather than one of the most welcoming and generous European countries offering homes to millions fleeing conflicts in the Middle East.

A new report by human rights group Amnesty International says the surge in hate crimes against migrants and signs of "institutional racism" among law enforcement agencies actually dates back to the refugee influx over the past two years. It pointed to the 2011 discovery of the National Socialist Underground (NSU) and how the authorities failed to properly investigate the perpetrators of NSU's murders of nine immigrants of Turkish and Greek origin between 2000 and 2007. "With hate crimes on the rise in Germany, long-standing and well-documented shortcomings in the response of law enforcement agencies to racist violence must be addressed," Amnesty researcher Marco Perolini said as the report was released in Berlin at a press conference yesterday.

The investigation into killings initially focused on the family members of victims, and investigators long believed that the murders were a result of domestic disputes in the migrant community, up until the discovery of the gang when the murder weapon was found in a house occupied by Uwe Boehnhardt and Uwe Mundlos, two members of NSU who took their lives before police caught them after a foiled robbery in 2011. Beate Zschaepe is the sole surviving member of the gang, and is currently standing trial.

The NSU case is entangled in a string of incidents that has led the families of the victims to doubt whether the gang's activities were properly investigated, and to suspect that German intelligence had knowledge of the NSU's crimes, thanks to its informants in Germany's neo-Nazi underground. Amid developments fueling the suspicion was the alleged demolition of several key documents regarding informants tied to the gang by German intelligence, deaths of key witnesses in the case, and the disappearance of several documents about the informants kept by intelligence services.

Quoted by Amnesty's report, Yvonne Boulgarides, wife of Greek immigrant Theodorus Boulgarides, who was killed by NSU in Munich in 2005, said German law enforcement never treated her or her daughter as "victims," and they were always regarded as "suspects" by police or politicians "as if we were hiding something. Nobody asked us about our opinions or listened to us."

The report says "institutional racism" was apparent when the German police exhibited reluctance to adequately investigate the racist motive behind the murders, most tellingly by the discarding of a case analysis in 2006 by investigators in the state of Bavaria, who suggested the motive and turning to stereotyping to profile the perpetrators. It points out names given to investigation teams for the murders named after the Bosporus in Istanbul and the crescent symbol on the Turkish flag. It adds that though German officials may not be outright racist or follow racist policies, they failed to ensure equal treatment of people irrespective of race or ethnicity.

Amnesty said in a statement that although inquiries into the failures in tackling the NSU case resulted in a number of recommendations for improvement to be implemented by law enforcement, "they have not tackled the pressing question of whether institutional racism is contributing to the ongoing failure to diligently identify, record and investigate possible racist crimes."

Justice Minister Heiko Maas said his ministry would carefully evaluate Amnesty's report and examine whether action needed to be taken.

"One thing is clear - a state under the rule of law can never accept racist violence. We need to do everything we can to quickly catch the perpetrators and rigorously punish them," he said in an emailed statement.

After a 19-month inquiry into the NSU, a parliamentary committee said a combination of bungled investigations and prejudice enabled the NSU to go undetected for more than a decade.

The Amnesty report said Germany should set up an independent public inquiry to look over the NSU investigations, as well as how Germany classifies and investigates hate crimes.

It said part of the problem was that there was a high bar before a crime in Germany is regarded as racist and treated as such.

Turkey is closely following the developments regarding the case, as most victims were Turkish-Germans. Mustafa Yeneroğlu, head of Parliament's human rights committee, recently criticized the process regarding the NSU. Yeneroğlu expressed concerns over the deaths of several eyewitnesses during the trial process and the failure to shed light on the role of intelligence. He said Turkey expected Germany to fulfill a pledge by German Chancellor Angela Merkel for the full revelation of the gang's activities and connections. "Germany can truly shed light on the case only when it investigates the role of the police and intelligence agencies in the murders, and the true structure of the NSU," he said.
RELATED TOPICS