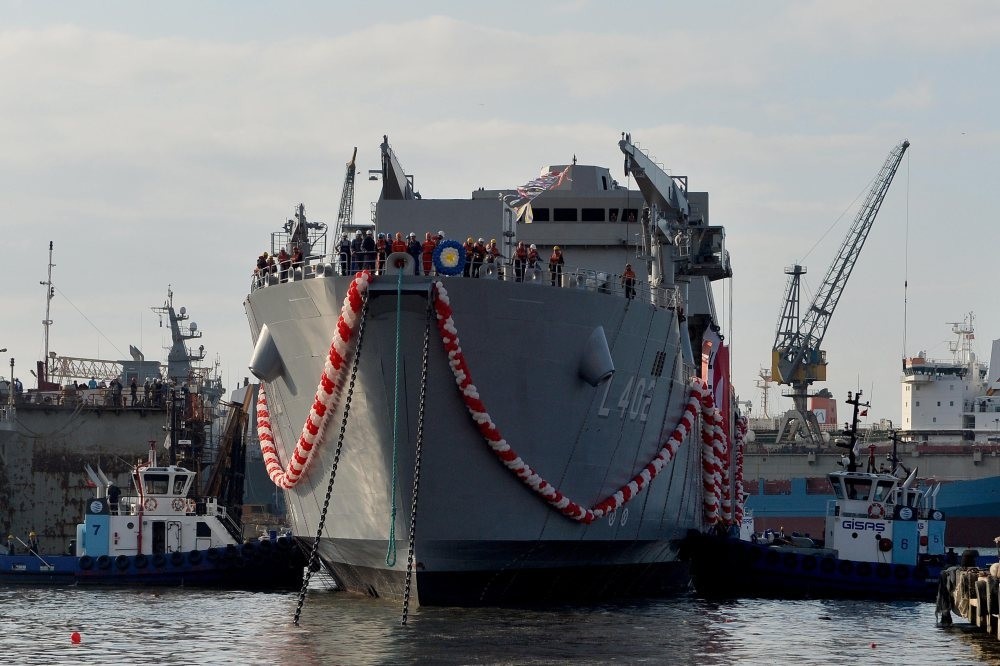 Bayraktar (above) was the first domestically-produced landing ship in Turkey. The country plans to expand its fleet of locally made vessels.
by Daily Sabah with Agencies Jul 16, 2016 12:00 am

Sancaktar, "standard bearer" in Turkish, will be commissioned with a ceremony on Saturday, nine months after Bayraktar, "flag bearer", another landing ship was inaugurated. It will join the fleet of amphibious landing ships planned by the Undersecretariat for Defense Industries, a state-run agency that spearheads domestic defense projects.

The ceremony will be held in Istanbul's Tuzla district at a shipyard run by Anadolu Shipyard (ADİK), which won a 2010 tender to supply amphibious landing ships to the Turkish army.

Amphibious ships are used for beachhead operations and the Undersecretariat for Defense Industries said in a written statement that the ships would be employed for operational and logistic duties in army operations as well as aid and assistance during natural disasters, with their wide decks capable of carrying a large number of vehicles and people. Sancaktar will officially commence operations in October 2017 while Bayraktar will be launched in February 2017.

The ship is the creation of Turkish engineering while its battle command systems and software are designed by national defense contractors ASELSAN and HAVELSAN.

Experts say the two ships will greatly contribute towards helping Turkey adapt to increasing geopolitical changes and humanitarian crises in the region, as the country endeavors to become a powerful regional and international actor in politics, economics and conflict resolution.

Like the identical Bayraktar, Sancaktar incorporates an "upper-intermediate" sized monohull design made of steel and will have a service life of 40 years. The ship also includes a helipad.

It has an overall length of about 139 meters and can travel at a speed of 18 knots per hour. The Undersecretariat for Defense Industries described it as the largest warship built by a Turkish company with the latest technology.

National Defense Minister Fikri Işık said Turkey finally reached a point to where it could develop its own defense technology. Speaking on Friday in Istanbul at an event where defense and aviation industry export figures were disclosed, Işık said Turkey and its region remains under constant security threats.

"We have three things to stick to in to order to survive and ensure a better future, a strong democracy, a strong economy and a strong army. We have an army with one of the best trained personnel in the world but this qualified workforce should also be endorsed with a strong defense industry," he said.

Işık said Turkey is now capable of developing its own technology and a recent decision by NATO to employ Turkey's electronic warfare capabilities was a testament to the improvement in the country's defense capabilities. Işık also noted a recent deal for modernization of Pakistan's submarines.

Turkey also plans to indigenously produce its first aircraft carrier in the near future. Authorities say domestic production rate in the defense industry has increased to 60 percent from 24 percent in almost a decade.
RELATED TOPICS