Erdoğan says extradition of Gülenist fugitives on run after failed coup to be requested from US, EU 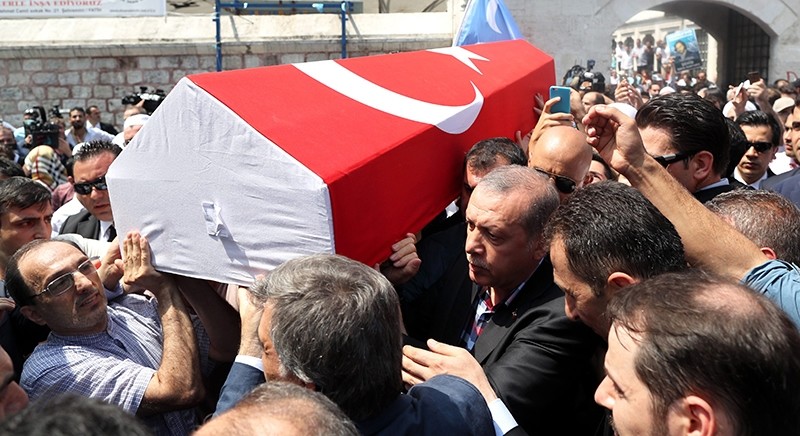 President Recep Tayyip Erdou011fan carries the coffin of Ilhan Varank, brother of Erdou011fan's advisor, along with the people. (EPA Photo)
by Daily Sabah Jul 17, 2016 12:00 am

President Recep Tayyip Erdoğan on Sunday said that formal requests to extradite Gülenist fugitives, who were involved in the failed coup attempt and are on the run, will be made to the U.S. and EU.

President Erdoğan spoke after the funeral ceremony of his chief advisor's brother, Ilhan Varank, who was killed in a gunfight between pro-coup soldiers and police officers.

Erdoğan offered his condolences for the victims who were killed by soldiers linked to the Gülenist Terror Organization (FETÖ), who attempted to carry out the coup.

He underlined that the FETÖ soldiers were responsible for the death of Varank and many others.

The president said that FETÖ spread like a cancer within the state, and assured that Gülenists will be removed from every position including military and judiciary.

After the funeral, the crowd expressed their wish for the perpetrators of the coup to be executed, a demand which was often heard from masses during celebrations to which Erdoğan replied "I said this yesterday, the people's demand cannot be swept aside. This is your right."

A ceremony, that started with Quran recitation, was held for Prof. Ilhan Varank at Yıldız Technical University in Istanbul, where the 45-year-old professor was lecturing, followed by the rector's speech.

Prof. Ismail Yüksek, rector of the Yıldız Technical University, condemned the perpetrators of the attempted coup, and said they have to pay for what they have done.

He said it's difficult to understand how an academic could be shot while trying to peacefully protest the coup-attempting soldiers.

Varank's body was taken to the Fatih mosque for funeral services, which was also attended by President Erdoğan and other top diplomats of the country.