Anti-coup rally on Gülen's doorstep brings US Turks together 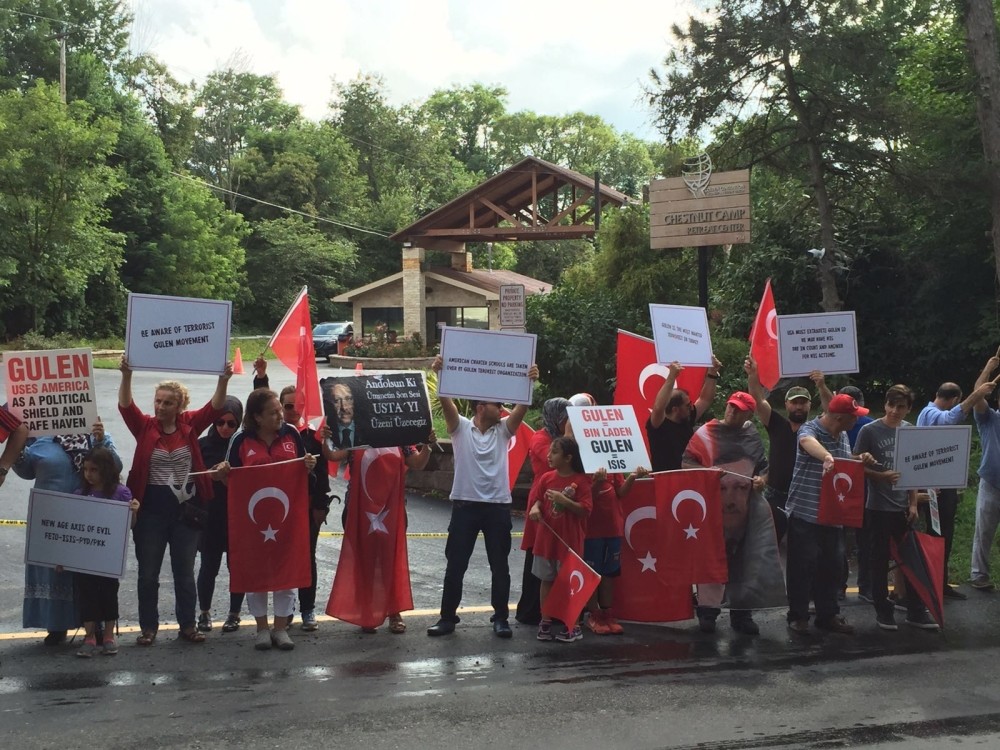 Demonstrators converged at the gate of the compound where Fethullah Gu00fclen lives in Pennsylvania.
by Daily Sabah with AA Aug 02, 2016 12:00 am
In the second such rally in a month, Turks living in the United States protested outside Fethullah Gülen's residence in Pennsylvania. Gülen is the prime suspect in the July 15 coup attempt in Turkey,.

Braving the rain, a crowd carrying Turkish flags gathered outside the heavily protected compound where the 75-year-old former preacher lives. Amid a heavy police presence and repeated warnings by Gülen's private security guards, protesters decried the coup attempt by a Gülenist junta and called on the United States to deport Gülen to Turkey. They waved banners reading "Gülen=Bin Laden" and "Protect U.S. from Gülen."

Gülen has lived in the United States since 1999 after he arrived in the country in self-imposed exile. He lives in a compound in Pennsylvania's Saylorsburg owned by a Gülenist foundation. The Golden Generation Chestnut Camp Retreat Center where he resides was the scene of another protest immediately after the coup attempt, which saw hundreds of people killed by pro-coup soldiers. Ankara insists that Gülen and his Gülenist Terror Organization (FETÖ) are behind the foiled putsch attempt and has presented the testimonies of coup soldiers pledging loyalty to Gülen as evidence. Fethullah Gülen is already implicated in cases related to two previous coup attempts in 2013 as well as a number of cases involving illegal wiretapping, money laundering, extortion, forgery and orchestrating sham trials thanks to Gülenist infiltrators within the police, judiciary, bureaucracy and military.

The United States is among the most popular locations for Gülenists where they run several charter school chains- taxpayer-funded schools that attracted an FBI probe following allegations of fraud concerning federal grants. Along with Gülen, several well-known figures linked to the group live in the United States to avoid being charged in ongoing investigations against FETÖ in Turkey.

Turkey is looking for Gülen's extradition both for the coup attempt and other cases though Ankara has been disappointed with Washington's handling of the extradition request. Prime Minister Binali Yıldırım recently decried U.S. officials' insistence on more evidence to justify Gülen's extradition and said the Obama administration's lack of support for extradition was "heartbreaking." If extradited, Gülen might spend the rest of his life in jail as prosecutors are looking for life sentences on terror charges.
RELATED TOPICS