Nation makes history with rally uniting all for democracy 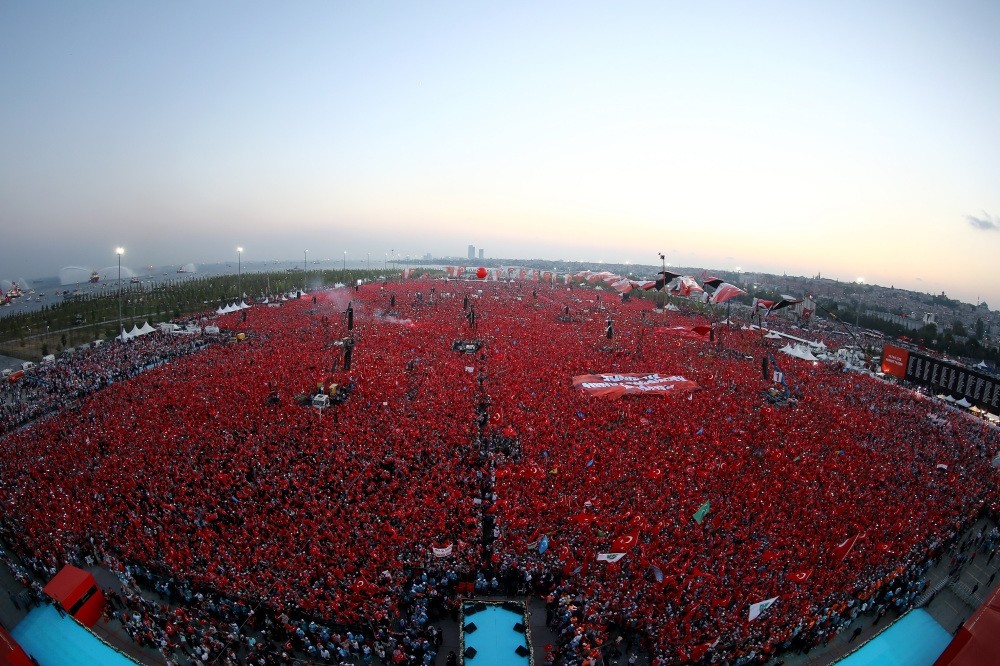 Experts say Sunday's rally in Istanbul, which brought together people and politicians of all ideologies to celebrate the resistance against the July 15 Gülenists coup attempt, was a 'landmark' in the country's history

Unprecedented unity was on display on Sunday at a rally that brought together people from all walks of life and of different ideologies who convened for a democracy rally in the wake of the July 15 Gülenist coup attempt.

The Democracy and Martyrs Rally was dedicated to the public resistance to the putsch attempt and those killed by coup troops while standing against them, drawing some 5 million people to Yenikapı Sqaure, a waterfront square on Istanbul's European side. Academics say the rally, with President Recep Tayyip Erdoğan, Prime Minister Binali Yıldırım, opposition leaders and supporters of opposition parties in attendance, is a turning point in the country's history.

Professor Beril Dedeoğlu, an academic who also served as a former EU minister, said the rally was important for being the first of its kind.

Dedeoğlu, a former member of the Wisemen Council who advised the government on the reconciliation process with the PKK to grant Kurds' rights, said the rally was "probably the most positive event" in recent Turkish history and "a turning point." "It was for democracy and for people killed for democracy and showed that the support for democracy and those killed amounted to millions," Dedeoğlu told Anadolu Agency (AA). "I believe it is also a harbinger of what may come next [for democracy]. It made us proud to be citizens of Turkey, being part of an admirable public that showed its reaction to that extent and yet in a peaceful way," she said.

The rally was free of any political alignment as Erdoğan and its organizers strictly advised the public not to wave any flag other than the Turkish flag. Erdoğan, Yıldırım, opposition Republican People's Party (CHP) Chairman Kemal Kılıçdaroğlu and Nationalist Movement Party (MHP) Chairman Devlet Bahçeli shared the same stage in Yenikapı, weeks after they held talks for supporting each other against any coup attempt in previous unprecedented development. Chief of General Staff Gen. Hulusi Akar, who leads the Turkish Armed Forces (TSK), also made a dramatic appearance at the rally. It was the first time a senior military commander attended such an event. Akar, who was held hostage by coup plotters for hours, pledged to the large crowd that the military would serve "only the state and nation" in a speech often interrupted with applause. Dedeoğlu said Akar's participation was "unnatural" but "important" to show the coup attempt was not the work of the TSK. "We have been through an extraordinary time and he made a good speech to confirm the military did not take part in general in this coup attempt," she added.

Mehmet Muş, the ruling Justice and Development Party (AK Party) parliamentary group deputy chairman, told reporters yesterday that the rally was "a repeated display of the nation's iron will against those attacking the national will in the July 15 attempt." Muş said the "Yenikapı spirit" would help efforts for a better future for the country. He said millions, regardless of their political views, wanted to attend the rally. "Participants of the rally convened there for a shared cause, be they citizens supporting the CHP or MHP. Certainly, this will have a positive impact on our work at Parliament for the future of the country. The AK Party is ready to do what it can in terms of reconciliation to improve this culture of reconciliation," he said.

CHP group Deputy Chairman Levent Gök, echoed Muş's views on the "Yenikapı spirit." "July 15 was a day of honor for Turkish politics and politicians stood for democracy, national sovereignty and the voters' will against the coup plotters. What happened in Yenikapı was the reflection of this spirit," he told reporters yesterday. "The crowd in Yenikapı was larger than the populations of some countries. This was the spirit of July 15. Now we need to adopt a new political language. The CHP will continue supporting the ruling party on any issue for the interest of Turkey," Gök said.

MHP Deputy Chairman Mehmet Günal said the Yenikapı rally was "meaningful" to show the nation's unity and loyalty to democracy. Speaking to reporters yesterday, Günal said that "the evil that was the coup attempt gave rise to something good," referring to parties and the public joining forces to stand for democracy. "I hope this will prevail and agreement between parties will help our country's future," he said.

Sunday's rally brought together three parties that had been loggerheads for a long time. Supporters of the parties have been accusing the others of polarizing political discourse. However, the coup attempt by Gülen-linked junta brought them together, the first time such politically diverse parties have joined forces for a common cause in the brief history of the Republic of Turkey. Bahçeli and Kılıçdaroğlu, who have often been in a war of words with Erdoğan, accused of imposing a dictatorship, were quick to affirm their staunch anti-coup stance within hours of the coup attempt and accepted talks with the country's leaders to pursue a common policy against the coup attempt and its culprits unconditionally.

Professor Mazhar Bağlı, a sociologist from Karatay University, said the rally proved that the so-called polarization and divide in Turkey and perceived hostilities between people actually do not exist. "People can openly declare their political affiliation and identities, but it was the first time they showed clearly what it takes to be a nation. This is proof of the failure of the Gülenist Terror Organization [FETÖ] and the PKK, which sought to undermine unity for a long time," he told AA. "We have seen how people from all segments of society can come together in a great display of unity when it comes to defense of the country, democracy and the national will. The PKK and FETÖ have long wanted to keep people divided, but this exhibition of unity has proven their efforts futile," he said.
RELATED TOPICS