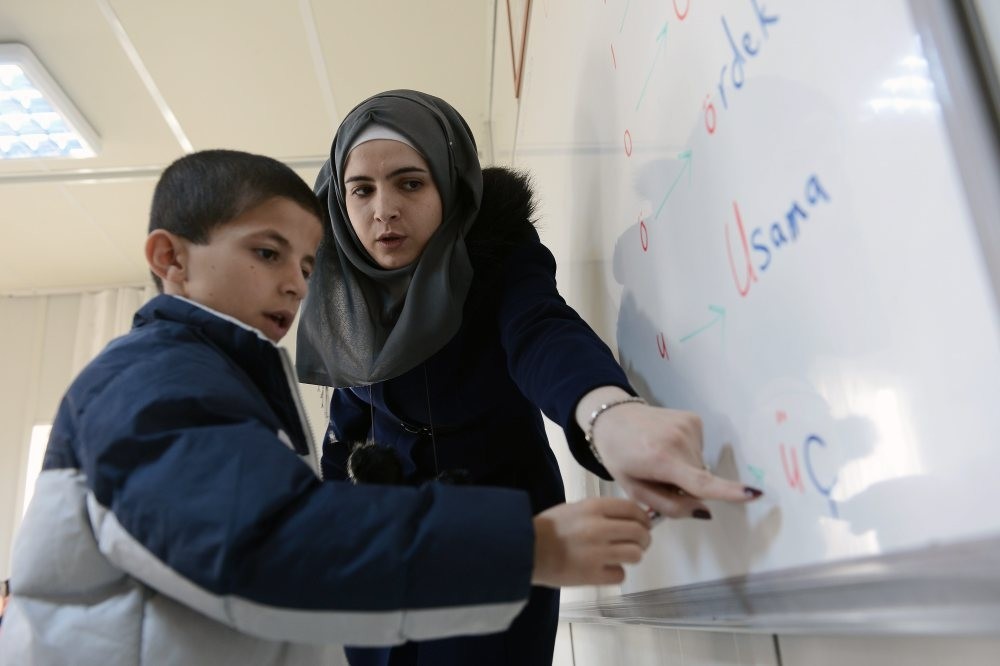 A Syrian teacher with her student at a refugee camp in the city of Malatya.
by Compiled from Wire Services Aug 10, 2016 12:00 am
The Ministry of National Education has joined forces with UNICEF for a new program to boost education among the millions of Syrian refugees who have taken shelter in Turkey in the wake of the ongoing brutal civil war. Syrian teachers will be trained to be teachers and will, in turn, train fellow Syrian refugees to be teachers, aiming towards a higher level of education for the thousands of child-aged refugees.

The program started in the central city of Konya, where 257 teachers will undergo pedagogic training in knowledge and improvement of classroom management skills. Speaking at a ceremony at the launch of the program, Ministry Deputy Undersecretary Ercan Demirci said that a large number of the nearly 3 million people who found a safe haven in Turkey from conflict-ridden neighboring Syria are teachers. "Turkey faces a new reality with the arrival of Syrians and we have an opportunity to help them. This is an opportunity to participate in the rebuilding of Syria, to shape its future. Education and knowledge are key to this aspiration." Demirci noted that approximately 995,000 of the 3 million refugees are school-aged children, adding, "We have 360,000 children in the infant-through-four-year-old age group and some 260,000 children currently enrolled at temporary education centers," referring to informal schools exclusively for Syrian refugees sanctioned by the Turkish state. Demirci noted that about 75,000 children are attending Turkish schools and a total of roughly 360,000 children are enrolled in the education system, acknowledging that this figure is low. "We should give serious consideration to this issue and seek ways to have more children enrolled in schools while offering them a better education."

With the war in Syria reaching its fifth year, the Turkish government is striving to reach the so-called "lost generation" of refugees. Children make up a substantial portion of the refugee population that fled their devastated country for Turkey, Lebanon and Jordan, and they are among the most vulnerable. Experts consider education as key to saving this "lost generation" from a bleak future; yet, most refugees are forced to skip school, either compelled to earn a living for their families or due to difficulties in adapting to life in their new host countries.

The Ministry of National Education has issued new regulations that make it easier for refugee children to access education and all young refugees registered by authorities are eligible to attend school. The country offers Turkish classes and vocational training for Syrians of all ages at public education centers which host lifelong learning courses, ranging from handicrafts to computer literacy. A half-day course system in Turkish schools offers separate classes for refugee children, who take afternoon classes taught by Syrian teachers. The classes are compatible with Syrian academic curriculum.

Over the next two weeks in Konya, Syrian teachers from various cities across Turkey will attend classes in pedagogic skills taught by university lecturers. A total of 514 teachers will undergo training in class management, introduction to teaching, educational methods and techniques, measurement and student assessment, educational psychology and guidance. UNICEF will cover the costs of the training.
RELATED TOPICS