Public outrage over escalation of PKK terrorism in the east 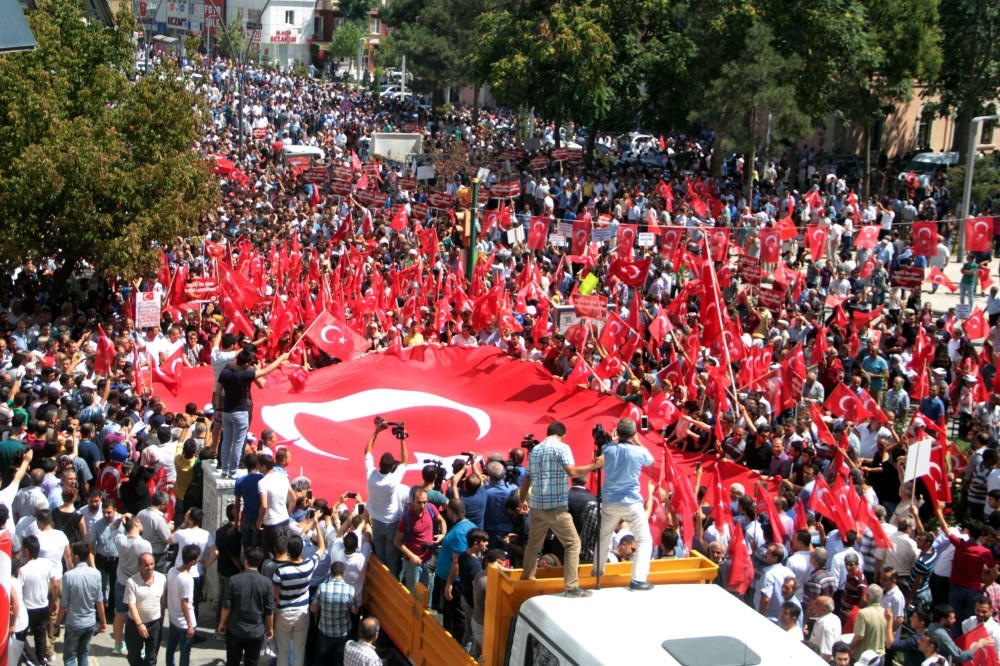 People took to the streets on Friday to protest the terror attacks by the PKK, which escalated its campaign of violence this week in eastern cities. Three attacks by the terrorist organization hit the country's eastern and southeastern provinces in the space of 24 hours. Late Wednesday, four people, including two police officers, were killed, and more than 70 were injured in a bombing in the province of Van. It was followed by another attack that killed six people, including five soldiers, in the province of Bitlis. On Thursday, a suicide car bombing targeting police headquarters in the city of Elazığ killed three police officers and injured hundreds of others.

The crowd, carrying Turkish flags, condemned the terrorist organization that resumed its attacks after a brief lull in the wake of the July 15 coup attempt. "May Allah curse them. We don't deserve this violence. This is inhumane," Halime Arıç, a member of the angry and grieving crowd that took to the streets in Elazığ told Anadolu Agency. "They cannot divide us. We are here to show our support for the state, for the police," Gökmen Arslan, another demonstrator, said. The attack on Elazığ was the largest ever in the city located in a predominantly Kurdish region. Though attacks in the city are rare, the PKK is active in the region where it claims to fight for Kurdish self-rule.

Speaking after the attacks, President Recep Tayyip Erdoğan said on Thursday that the PKK's only aim was to target peaceful order in the region and shed blood. He vowed to retaliate in kind against the PKK's recent attacks. He also drew attention to Turkey's ongoing war with the Gülenist terror cult, FETÖ, and the PKK, contending that FETÖ had aided and abetted the PKK in its recent attacks. He slammed the West for leaving Turkey alone in its fight against terrorism. "Since July 15, security forces have killed 182 PKK terrorists, detained 3,000 suspected members, 318 of whom were arrested," he said, while assuring that those responsible for attacks against Turkey will pay dearly.

In the southeastern city of Mardin, where curfews were imposed during the past months to quash PKK attempts to take control of the city, representatives of several nongovernmental organizations released a joint statement. Mahmut Yavuz, speaking on behalf of activists against the PKK, said the terrorist organization was an "enemy of the people in the region first." "We will reinforce our unity and will not bow down to these attacks just like we stood against the coup attempt," he said, referring to nationwide public resistance against the putsch.

Political parties, excluding the Peoples' Democratic Party (HDP), which is accused of being a political affiliate of the terrorist organization, plan to hold joint rallies in the southeastern city of Diyarbakır in the coming days. The rally will be similar to the "democracy and martyrs rally" held in Istanbul on Aug. 7 to show national solidarity against the coup attempt.