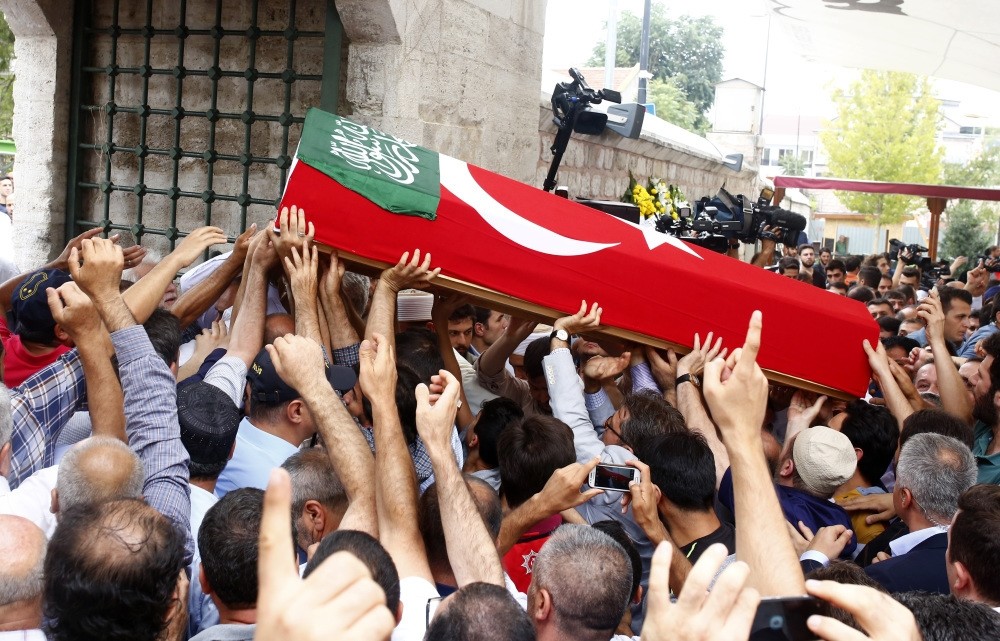 A crowd carrying flag-draped coffin of Ramazan Saru0131kaya.
by daily sabah Aug 25, 2016 12:00 am
Friends, family and a large crowd attended the funeral of Ramazan Sarıkaya, the latest victim of the July 15 coup attempt. Sarıkaya, who was injured during the public resistance against pro-coup troops in Istanbul, died of a heart attack on Tuesday while he was being treated for gunshot wounds at an intensive care unit.

His death brought the total death toll in the putsch attempt blamed on the Gülenist Terror Group (FETÖ) to 247. Another 2,194 people were injured.

Sarıkaya, 52, was among the civilians who accompanied police officers attempting to take back the city hall captured by the coup plotters on the night of July 15. The father of four was injured when soldiers indiscriminately fired upon the unarmed crowd trying to enter the building.

Funeral prayers were held at a mosque for Sarıkaya, who was known for his volunteer work for a local charity offering religious education.

The July 15 coup attempt, which was the third major coup attempt in the history of the Republic of Turkey, was quelled thanks to staunch resistance from the public heeding calls by President Recep Tayyip Erdoğan and Prime Minister Binali Yıldırım, "to reclaim the streets" from coup troops. Most casualties were in Istanbul and in the capital Ankara where putschists tried to seize the Presidential Palace, city halls, military bases, police headquarters and other strategic locations. Many victims were unarmed civilians hailed as "martyrs" and "democracy heroes" who confronted heavily armed troops in tanks and armored vehicles. Some managed to stop the tanks by laying in front of them while others, with the aid of armed police officers, wrestled control of tanks from the coup officers who surrendered when large crowds surrounded them.

The public resistance outside the city hall in Istanbul's Fatih district was lauded as a democratic victory by the country's leaders. Eyewitness accounts and footage from July 15 show crowds marching to the building despite repeated gunfire by pro-coup troops that killed scores of people.
RELATED TOPICS