Syrian women in refugee camps informed of their rights 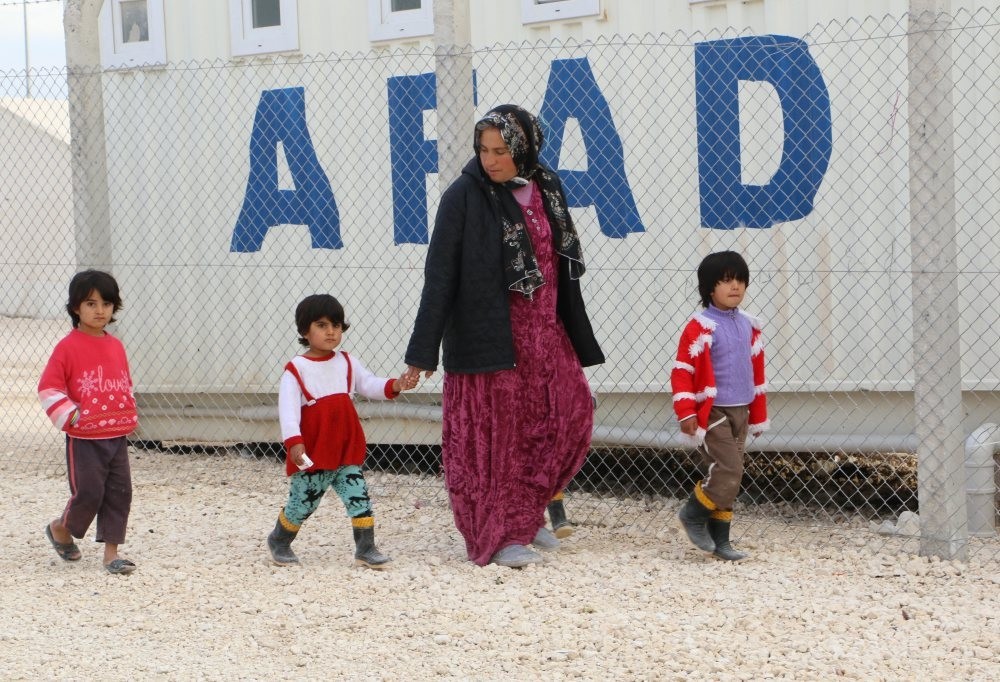 A Syrian refugee woman walks with children at a refugee camp in u015eanlu0131urfa. Women and children make up three quarters of the refugee population according to UNHCR.
by Daily Sabah with Reuters Aug 26, 2016 12:00 am

Women, the most vulnerable members of the Syrian community in refugee camps across Turkey, along with children, are being informed about their rights, especially regarding underage marriage and domestic violence

Turkey, host to the world's largest Syrian refugee population, which swelled after a civil war broke out in the country five years ago, is looking to improve the lives of the most vulnerable members of the refugee community - women.

Authorities said Turkish staff supervising the 26 camps concentrated near Turkey's lengthy border with Syria were trained on the international protection of rights, and forced and underage marriages to educate the women in camps on the issues during a project sponsored by the Office of the United Nations High Commissioner for Refugees (UNHCR). Women were also the target of distributed leaflets in Arabic informing them on domestic violence, the legal marriage age, legal marriages, their civil rights and where and how to apply to authorities in the case of the violation of their rights. The project is the result of cooperation between the Disaster and Emergency Management Authority (AFAD), which oversees the camps, and the United Nations Population Fund.

Answering opposition lawmakers' questions on the state of women in refugee camps, Deputy Prime Minister Veysi Kaynak, whose office oversees AFAD, said they were striving to ensure the comfort of women in the camps. Along with education on issues affecting women, Kaynak said they provided bathhouses and lavatories in the camps in areas that ensure women's privacy and security measures have been put in place to prevent any assaults on women in the camps.

According to the UNHCR, women and children make up three-quarters of the refugee population and the majority of them depend on humanitarian aid. Of the more than 2.7 million Syrian refugees hosted by Turkey, only a fraction of them live in refugee camps - the majority typically buy or rent properties or are forced to live in poverty, relying on occasional deliveries of humanitarian aid.

The statement by the Turkish authorities on the state of women came amid concerns regarding the dangers refugee women face in Europe.

Amnesty International says female asylum seekers in Greece are particularly vulnerable to violence, exploitation and sexual harassment from the moment they leave Iraq and Syria until their arrival on European soil. The European Union recommended separate bathrooms and sleeping areas but these are non-existent in many refugee camps and reception centers in Greece. In January, Amnesty International released a report based on interviews with 40 women in Germany and Norway who traveled from Greece and then across the Balkans. The report said adult and child female migrants face violence and sexual assault at every stage of their journey. Women and girls traveling alone or women accompanied only by children said they felt particularly under threat in Hungary, Croatia and Greece, where they were forced to sleep alongside male refugees. The report criticized the conditions of some facilities for migrants in some European countries, saying bad conditions at some facilities are also among the factors that make women more scared as they slept in facilities with hundreds of men with no privacy.

Since the uprising against the Bashar Assad regime in Syria evolved into all-out civil war, Turkey has embraced an open-door policy for those fleeing the brutal conflict and has accommodated a small number of refugees in tent camps located across the border. Turkey is among the major donors accepting refugees and its camps currently host more than 253,000 refugees.
RELATED TOPICS