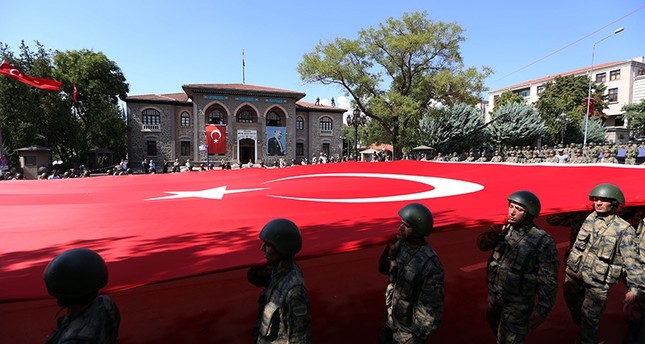 Turkey marked Victory Day, a military-themed occasion to remember a war of independence, without the parade of tanks and troops, more than one month after a terror cult’s members in the army tried to seize power

Victory Day, the 94th anniversary of a decisive battle that paved the way for Turkey's independence, was marked yesterday. This year's ceremonies to mark the day were significantly stripped of their military themes in the wake of the July 15 coup attempt where a small junta of Gülenist officers tried to overthrow the government and kill the president. Although a large portion of the Turkish Armed Forces (TSK) did not join the putsch attempt and fought putschists, authorities this year decided to scrap military parades that are viewed as a show of force and a showcase of the country's military power.

Ceremonies were held all across the country where locals, local officials paid respects to Mustafa Kemal Atatürk, the commander of the army at the time of the Dumlupınar victory over occupying Greek forces. He would later become the founder of the Republic of Turkey.

In capital Ankara, President Recep Tayyip Erdoğan, Prime Minister Binali Yıldırım and opposition leaders visited Atatürk's mausoleum, Anıtkabir, in the early hours of the morning to lay wreath in memory of the national hero credited with reviving a country torn apart by World War I. Tight security measures were taken during the ceremonies and visitors were allowed in after passing through X-ray scanners. Civilians also accompanied government officials and the president for the first time at the Anıtkabir ceremony. The civilians were families of citizens killed during the July 15 coup attempt and those injured by the gunfire of pro-coup troops.

"Honorable Atatürk, as a nation, we are proud and excited to mark the 94th anniversary of the great victory. We exert utmost efforts to sustain our Republic you entrusted to us, with the legacy of determination and faith Turkey exhibited on the path to victory in the war of independence in the face of difficulties, poverty and misery," Erdoğan wrote in the guestbook at Anıtkabir. He also wrote that Turkey's struggle for a better future, despite "heinous attacks of terrorist groups," prevailed. "Historic projects like the Osman Gazi Bridge and Yavuz Sultan Selim Bridge are displays of our determination and sources of pride," he added, referring to two landmark bridges shortening travel times between northwestern Turkey and rest of the country. The president also mentioned the July 15 coup attempt in his message and said "the strong will of the nation exhibited on July 15 by putting aside their differences like it did 94 years ago, instills us with confidence." The coup attempt was staved off thanks to a strong public resistance, the first in the history of modern Turkey, which had experienced two large-scale coups previously in 1960 and 1980.

After the Anıtkabir visit, Erdoğan received Cabinet ministers, dignitaries and representatives of foreign missions at the presidential palace.

The culmination of the Victory Day events in the capital is usually a ceremony, originally held in a vast square next to Atatürk Culture Center; however, this year celebrations were relocated to a road between two buildings in use as the home of Parliament after heavy rains and strong winds swept the giant stage at the square. Erdoğan and government leaders watched the parade of unarmed soldiers due to a strict non-military theme of the event this year and aerial stunt teams from the Turkish army did not perform stunts this year either. Tanks and other armored military vehicles were also absent from the ceremony in Ankara, while high school students took part in the parade this year for the first time, highlighting a more civilian theme.

Although it is a solemn occasion, Aug. 30 marks a significant military victory in 1922 in Dumlupınar, Kütahya in western Turkey. The army, led by Atatürk, whose forces split from the ailing Ottoman army, dealt the final blow to the invading Greek forces in the Battle of Dumlupınar after a previous battle forced Greeks to retreat further west.

Share on Facebook Share on Twitter
Previous in Turkey Three years after riots over plans to build over an Istanbul park,... Next in Turkey Accused of masterminding the July 15 coup attempt in Turkey, the Gülenist...
DAILY SABAH RECOMMENDS