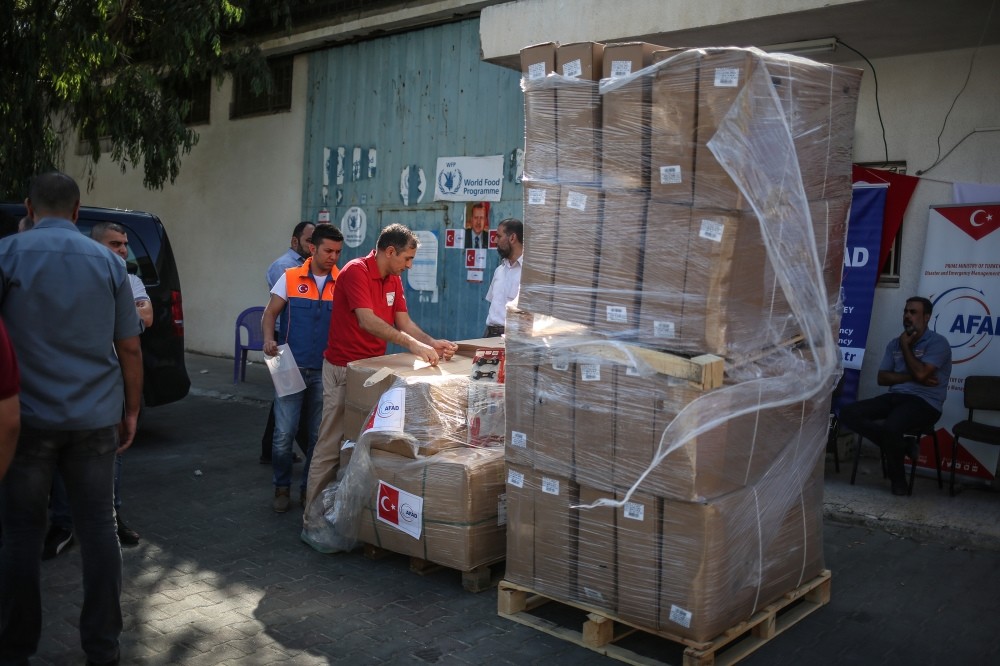 by Compiled from Wire Services Sep 09, 2016 12:00 am
The humanitarian aid put together with the assistance of 14 Turkish NGOs under the coordination of the Prime Ministry Disaster and Emergency Management Authority (AFAD), has reached Gaza before Qurban Bayram (Feast of the Sacrifice), also known as Eid al-Adha, as planned. The first part of the aid has been delivered to the Social Affairs Ministry of Gaza by a Turkish delegation representing 14 Turkey-based NGOs. The Turkish delegation coordinates the distribution of the aid in collaboration with the Gazan Social Affairs Ministry. Karim Abu Salim Border Gate Director Munir al-Gaban stated that the 150 tons of humanitarian aid sent from Turkey reached Gaza on Wednesday night.

Speaking to Anadolu Agency (AA) correspondent, the director of AFAD's Improvement Department Cengiz Akın said Turkey will not ignore those who are in need of help. "We want to fulfill our responsibility to Gaza and the Gazan people," said Akın, adding Turkey will continue to help Gaza in any way it can. Turkey's temporary ambassador to Jerusalem, Burç Ceylan, who was also present during the distributions, said that the first part of the aid was delivered to Gaza in three trucks. Ceylan also said that they will try to distribute all humanitarian aid before Qurban Bayram and continued, "Turkey does everything it can to transfer more humanitarian aid to Gaza and remove the Israeli blockade. Turkey will never turn its back to Gaza and will be there for the Gazan people in good times and bad."

The Turkish ship loaded with humanitarian aid disembarked Monday en route to the blockaded Gaza Strip docked in the Israeli port city of Ashdod. The ship named "Eclips," set out for Israel on Friday from Turkey's southern port of Mersin bearing some 2,500 tons of humanitarian aid. Turkey is providing 300,000 pieces of clothing, 1,000 bicycles bearing the Turkish flag, 100 wheelchairs for the disabled and backpacks and stationary for Gazan children as well as food and medical supplies. The Turkish Red Crescent also planned to sacrifice animals in Gaza for Qurban Bayram. The meat of the sacrificed animals will be distributed to hospitals, where people who have been injured during clashes receive treatment, orphanages and families who have a hard time living under the Israeli blockade.

Since 2007, the Gaza Strip has suffered a joint Israeli-Egyptian blockade that has deprived the enclave's roughly 1.9 million inhabitants of their most basic needs, especially food, fuel, medicine and construction supplies. The latest influx of Turkish aid into Gaza comes within the context of a deal signed recently between Turkey and Israel in which the two agreed to restore diplomatic relations following a six-year hiatus. Prime Minister Binali Yıldırım said that Tel Aviv had met all of Ankara's preconditions for normalizing ties, which were severed in 2010 after Israeli commandos stormed a Gaza-bound Turkish aid vessel. Under the terms of the agreement to normalize relations, the two countries will exchange ambassadors and Israel will pay $20 million in compensation to the families of the 2010 flotilla attack victims. Israel has also agreed to Turkey's request to maintain a "humanitarian presence" in the blockaded Gaza Strip. The first aid shipment from Turkey to Gaza anchored in Ashdod on July 3 before Ramadan Bayram, also known as Eid al-Fitr, carrying 11 tons of staple food items including flour, rice and sugar as well as toys and clothes for children.
RELATED TOPICS