Turkey sends 500 tons of aid to Mosul amid humanitarian concerns 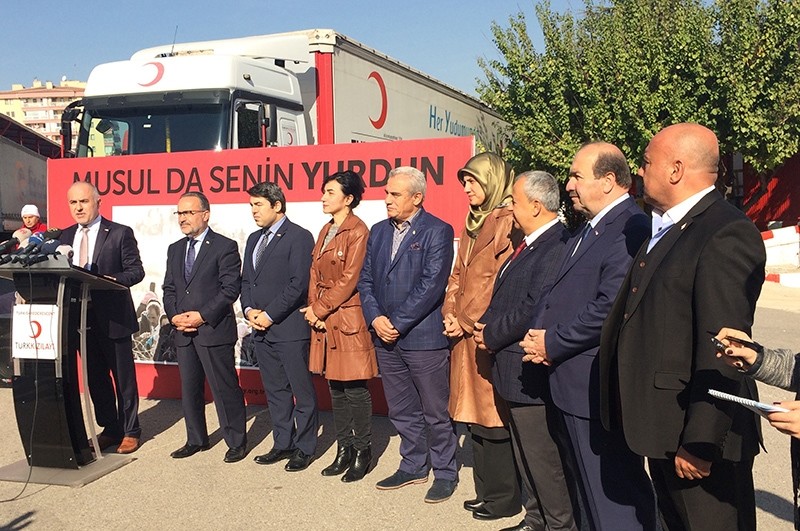 As the push to retake Iraq’s Mosul from Daesh is underway, Turkey, concerned over displaced people fleeing the conflict, sent 500 tons of humanitarian aid to Iraq on Friday

Turkey sent 20 trucks carrying 500 tons of humanitarian aid for 45,000 people on Friday to Iraq as part of Ankara's efforts to help those displaced due to the conflict between Daesh and Iraqi forces in Mosul, a stronghold of the terrorist group in Iraq.

The Turkish Red Crescent and Disaster and Emergency Management Authority (AFAD) is overseeing the aid delivery, which comes a few days after the troops of Baghdad's government and peshmerga forces of the Iraqi Kurdistan Regional Government (KRG) moved to capture villages around Mosul before a major offensive.

Speaking at a send-off ceremony in the capital Ankara for the trucks, Red Crescent President Kerem Kınık said the aid was part of a broader effort by Turkey to address the needs of the internally displaced. Kınık said military operation in Mosul where some 2 million people have lived under Daesh's oppression for more than two years, would have "a significant humanitarian impact." He pointed out difficulties in ensuring the safety of civilians and said a Red Crescent delegation had already visited the region where Mosul is located to assess the impact of a potential humanitarian crisis.

"The risk of a massive migration (of the displaced) is an obvious fact voiced by all parties involved in the operations. We took a series of measures to stop the wave of migration and care for the internally displaced within Iraq and the aid we sent today will be dispatched to people who fled the villages around Mosul," he said.

Primary humanitarian needs are food, accommodation and clothes for the internally displaced who left their residences with few possessions. The humanitarian aid Turkey sent on Friday consists of food for 10,000 people and clothes for 35,000 others and is destined to be delivered to about 30 villages liberated near Mosul.

In an interview with Reuters, Kınık said they were in touch with the United Nations and the KRG for the security of the trucks that will enter the country through the KRG-controlled north. Kınık told Reuters they expected a wave of "between 150,000 and 400,000 people" displaced and they planned expanding two camps for the displaced that are set up in Iraq for 20,000 people including "setting up a new camp for 100,000 people" if the situation worsens in Iraq.

Although it supported military training of security personnel in Iraq for anti-terror operations, Ankara drew the ire of Baghdad's government including some Shiite groups that opposed Turkish presence in Iraq while embracing the international coalition assisting the operations in Mosul.

Charities have launched an aid campaign titled "Mosul is your home too" in preparation for the wave of those displaced. The Turkish Red Crescent is leading the aid efforts for the city, a former Ottoman territory and home to an ethnic Turkmen community.

"These people are our neighbors, have been our brothers and sisters for centuries. They would turn to Turkey and would expect it to help them first in case of a crisis. We will not abandon them and heal their wounds. We will not leave them in the hands of a terrorist group," Kınık said at the send-off ceremony.

The United Nations' refugee agency UNHCR reported on Friday that displacement from Mosul remained low since the operations began. UNHCR spokesman Adrian Edwards stated that some 3,900 people fled Mosul and the al-Hamdaniya district while Ravina Shamdasani of the U.N. human rights office said Daesh has forced 550 people to leave the villages of Samalia and Najafia to go on Monday to Mosul.