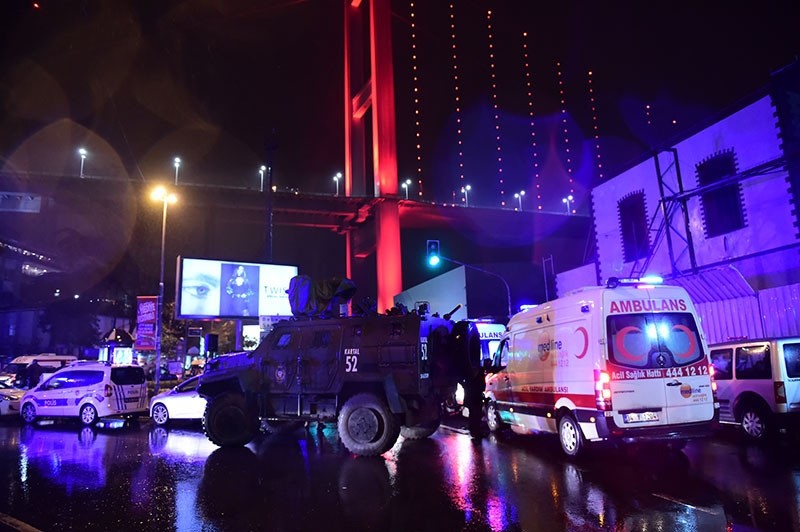 Leaders from around the world condemned a terror attack at an Istanbul nightclub early Sunday that killed at least 39 people and injured 65 others.

Pakistan has condemned in "strongest possible" terms the heinous terrorist attack at a night club in Istanbul. "We are deeply anguished as terror and tragedy have struck brotherly Turkey again," Pakistan's foreign ministry said in a statement on Sunday.

"We reaffirm our strong and unwavering solidarity with the Government and people of Turkey in its resolute fight against terrorism and reiterate our belief that such heinous acts aimed at undermining Turkey's peace, stability, progress and internal harmony would never succeed," the statement added.

Pakistani Prime Minister Muhammad Nawaz Sharif has also strongly condemned the attack. "Pakistani people share the grief of Turkish people and stand by them, in this most painful time. Terrorism is our common enemy and the world needs to put up a joint fight against this menace," he said.

Russian President Vladimir Putin expressed his condolences to his Turkish counterpart Recep Tayyip Erdoğan, the Kremlin said in a statement.

Putin said it was "hard" to imagine a "more cynical" crime than the murder of innocent civilians during New Year's holiday. "But, the terrorists are absolutely alien to the concept of human morality," he added.

Putin said common duty would be responding "decisively" to terrorist aggression. The president confirmed that Russia remains a "reliable" partner for Turkey in its fight against terrorism.

"Our hearts are with the Turkish people at this difficult time. I offer my condolences to the families of the victims and well-wishes to the injured," Rivlin added.

Greece issued a condemnation message on the foreign ministry website, expressing their full solidarity with the Turkish people and sent out sincere condolences to the families of the victims and wishes for a speedy recovery to the wounded.

The statement stressed "the need to strengthening coordination among world countries, and to unite the international community's efforts in order to ensure the eradication of terrorism and its causes."

Kazakhstan foreign ministry "strongly" condemned the terrorist attack. "The world has seen yet another manifestation of terrorism in this heinous crime whose organizers and inspirers should be found and brought to justice," the ministry said in a statement.

The ministry conveyed "sincere" condolences to the families of the victims and wished the "quickest" recovery to the injured. It also expressed strength, endurance and perseverance to the government and "fraternal" people of Turkey.

Georgian President Giorgi Margvelashvili said at his social Twitter account that he got angry about the terrorist attack in Istanbul. "We are in solidarity with President Recep Tayyip Erdoğan and Turkish people," he said.

Boris Johnson, UK Foreign Secretary said on Twitter: "Thoughts with Turkey after cowardly act of terrorism in #Istanbul nightclub attack. We stand shoulder to shoulder with our Turkish friends."

President of Azerbaijan, Ilham Aliyev condemned the terror attack in a statement on his website, wishing quick recovery for the wounded people.

"We are extremely angry because of this treacherous attack against the civilians. We support the toughest, decisive and continuous fight against terrorism," Aliyev added.

Iranian Foreign Ministry spokesman Bahram Qasemi issued a statement, saying, he "underscored that unity among all world countries is the sole way to tackle violence and terrorism across the globe."

Obama "reaffirmed the support of the U.S. for Turkey, our NATO ally, in our shared determination to confront and defeat all forms of terrorism," National Security Council (NSC) spokesperson Ned Price said.

"Sadly, this heinous attack is only the latest effort to kill and maim innocent civilians. These attacks only reinforce our strong determination to work with the Government of Turkey to counter the scourge of terrorism," Toner said.

"My thoughts are with those affected by the attack on people celebrating New Year and with the Turkish people," Stoltenberg said.

President of the European Parliament, Martin Schulz stated on Twitter: "It was supposed to be a night of celebration: terrorists turned it into one of violence, death, despair. My thoughts with Istanbul, Turkey."

EU foreign policy chief Federica Mogherini tweeted: "Our thoughts are with victims and their loved ones. We continue to work to prevent these tragedies."

British Ambassador to Turkey, Richard Moore tweeted: "Saddened and shocked to see more pain and heartache visited on Turkey as we enter the New Year.

"I condemn utterly this murderous attack. My heartfelt condolences to families of deceased and wishes for a speedy recovery to those injured," Moore said.

French Foreign Minister Jean-Marc Ayrault voiced solidarity with Turkey in a post on the micro-blogging website. "With all heart we are with Turkey which was terribly struck in this symbolic night."

Canada's Minister of Foreign Affairs on Twitter said: "Canada offers its condolences to families of victims and wishes a speedy recovery to those injured in tonight's horrendous attack in Istanbul."

Foreign Minister of Austria, Sebastian Kurz said: "Terrible beginning of the New Year in Istanbul. My sincere condolences to the friends and families of the victims."

Belgium's Deputy Prime Minister and Foreign Affairs Minister, Didier Reynders stated: "The year began in horror in Istanbul. Our thoughts are with the victims, their relatives and the people of Turkey."

German Federal Foreign Office said on Twitter: "Reina attack: We are deeply shocked and mourn with the people of Istanbul, Turkey."

National Executive Director of the Council on American-Islamic Relations, Nihad Awad, said on Twitter: "Our hearts with the families and loved ones of the civilians killed and injured by terrorists in Istanbul."

Tim Cook, CEO of Apple, wrote in Turkish: "We share your pain and sadness, dear Turkey. Istanbul our hearts are with you."

The attack comes three weeks after twin bombings in Istanbul killed at least 45 people, most of whom were police officers.