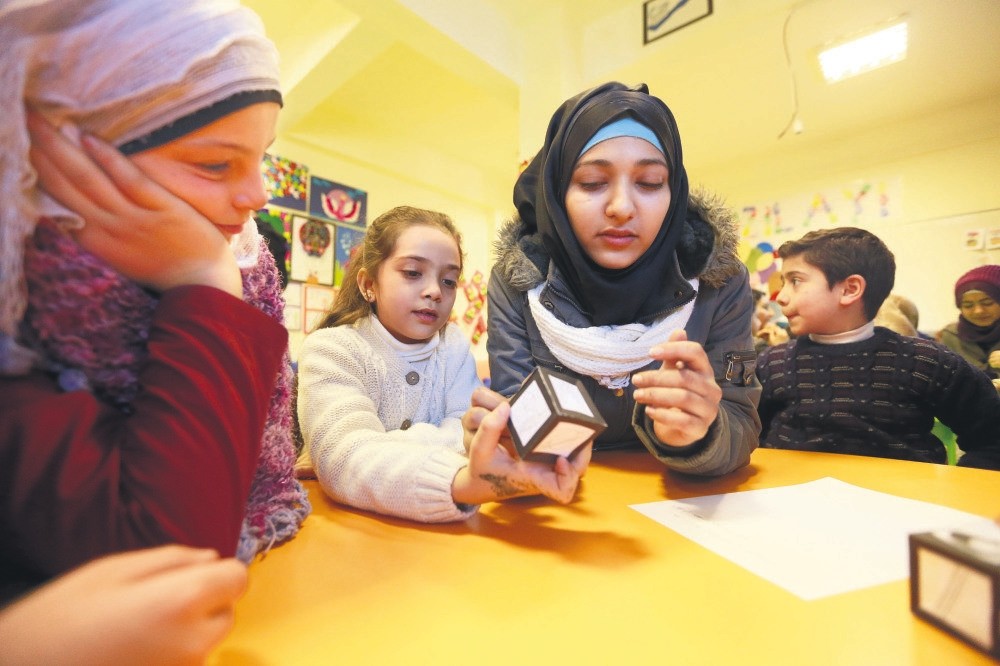 Bana Alabed (L), settled in Turkey she arrived from Aleppo with her family.
by Daily Sabah with AA Feb 02, 2017 12:00 am
Bana Alabed, 7, a Syrian girl whose Twitter posts on life during wartime in Aleppo made her a phenomenon, pleaded to U.S. President Donald Trump to lift the ban on Syrians. Trump has stirred up a storm with his executive order to suspend refugee resettlement and ban the arrival of Syrian migrants coming to the United States.

Aleppo's Twitter girl Bana Alabed has a message for US President Donald Trump: Syrian kids are not terroristshttps://t.co/TTXY0aKiUb pic.twitter.com/fppdsLUOUX

Alabed, who took shelter in Turkey after she and her family were evacuated from war-torn Aleppo, sent a video message to Trump and spoke to reporters on the plight of Syrian refugees.

In a video she uploaded to her Twitter account on Wednesday, the girl said: "Mr. Trump, have you ever had no food and water for 24 hours? Just think of the refugees and the children of Syria." As she was meeting with fellow children from Syria at a community center in the Turkish capital Ankara, Alabed told reporters that Syrian children were not "terrorists" in reference to a statement by White House Press Secretary Sean Spicer who reportedly said assuming someone would not pose a threat because of their gender and age would be misguided and wrong.

Alabed said she was expecting the U.S. president to help Syrian children but felt sorry when she learned he banned Syrian children from being able to migrate to the U.S.

The young girl last month wrote a letter to Trump when he took office. "You must do something for the children of Syria because they are like your children and deserve peace like you," she wrote, adding that she"begged" Trump to do something for those children. "If you can, I will be your best friend," she also wrote.

Children and women remain the most vulnerable members of society in Syria, where six years of civil war has killed thousands and left millions without a home. Half a million children are still trapped in besieged areas across Syria according to United Nations figures, and they are completely cut off from humanitarian aid and basic services. Turkey, which hosts nearly 3 million refugees from Syria, has led the efforts in the evacuation of civilians from Aleppo last year as forces loyal to Bashar Assad escalated attacks targeting civilians and rebels. After resettling in a safe area, Alabed and her family were brought to Turke,y where they were received by President Recep Tayyip Erdoğan. The girl continues tweeting about the plight of Syrians although images of her daily activities in a devastated neighborhood constantly bombed by warplanes have been replaced with her peaceful new life in Turkey. Bana's mother Fatima says they lost everything they had in Syria and it was a shame to see her daughter thinking she felt like she was "in a paradise" when they arrived in Turkey. "This is the normal life everyone is entitled to but it is a shame for humanity that these children, unable to go out while in Syria, think they are in heaven on earth," she told reporters.

Bana still looks forward to returning to her homeland. "I want to return. We will go back and rebuild our house,"she told reporters after speaking about how the playground she played in in Syria was bombed and her friends were killed in attacks.
Last Update: Feb 03, 2017 10:52 am
RELATED TOPICS