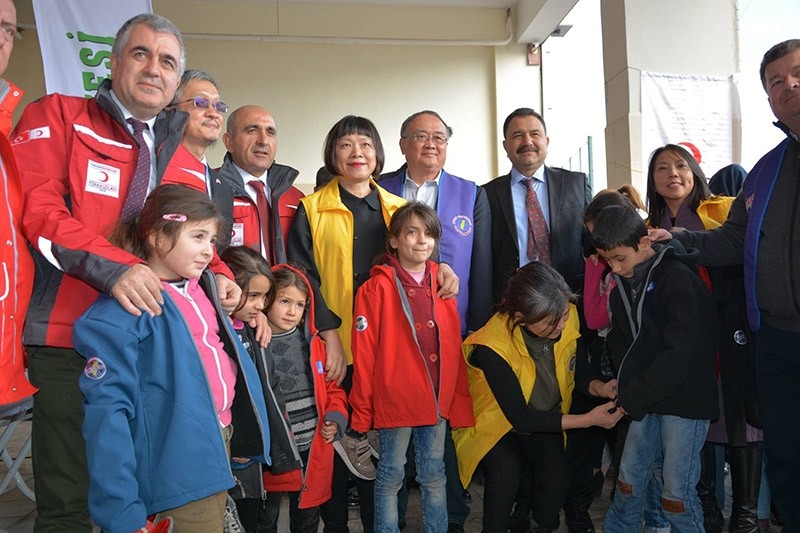 The World Taiwan Businessmen Foundation distributed winter clothes and shoes to 10,000 Syrian and Turkish families in need in Kilis.

The Taiwanese foundation worked in cooperation with the World Businessmen's Foundation of Turkey, the Turkish Red Crescent, the Fashion and Apparel Federation and the Kilis Municipality to deliver the items to families, reports said.

Members of the groups helped distribute winter clothes such as warm pants, coats and boots to women and children, including Syrian asylum seekers.

Taiwan's Ambassador to Ankara said that his country would like to continue working with Turkey on such endeavors: "Today's distribution is a small step but it is a good start for the Taiwanese government and we hope to continue a productive cooperation with you."

Kilis Mayor Hasan Kaya said that the aid sent by Taiwan was of great importance and he thanked the businessmen for their help, "In history there have been two types of people-- those who close their doors, souls and borders, and those who listen to the voice of their conscience, the ones who stand beside the victim and the oppressed in the name of humanity. Endless thanks to the people of Taiwan for their assistance," he said.

Jeff Yao, CEO of the World Businessmen Foundation, noted that his sole purpose was to aid those who had fled Syria. Yao explained that he wanted to see the clothing delivered to the Syrians in Kilis in person, "We appreciate the Turkish people for helping our Syrian brothers. It was our aim to come to Kilis to see the situation in person. We hope to continue this type of humanitarian aid, especially in terms of education."

The Fashion and Apparel Foundation President, Hüseyin Öztürk, expressed his sadness that civilians had experienced such a difficult situation because of the war in Syria, saying "We hope that children will grow up with toys rather than bombs…Whether we're on the other side of the world or speak different languages, we are against war with the same heart."

Turkey has welcomed over three million Syrian refugees fleeing conflict in their countries and has spent around $25 billion alone to provide assistance for the asylum seekers.