Syrian refugee teaches Arabic to the women of Turkey’s Kilis 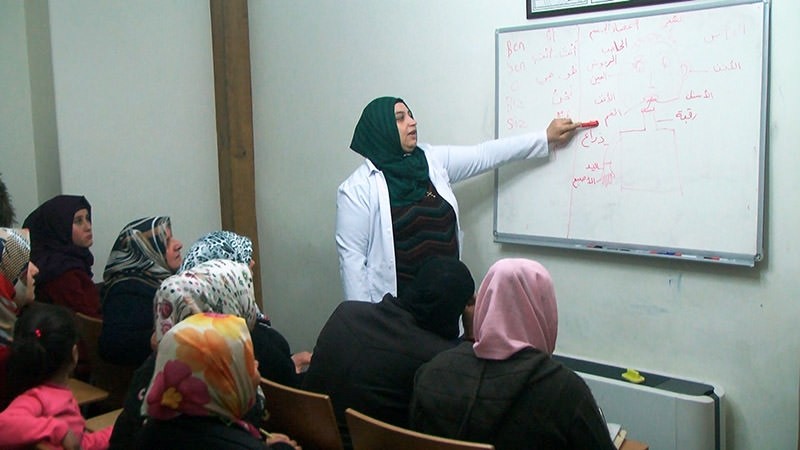 A Syrian refugee is working to bridge the language barrier between Syrians and the residents of Kilis by giving Arabic classes. Gufren Duden, who came to Turkey after losing her parents in Syria, quickly learned the Turkish language and is now teaching Arabic to the women of Kilis.

Duden first lost her father in Syria's civil war and then lived with her mother in Aleppo. She came to Kilis five months ago, after her mother also perished in the war.

The 37 year old used to teach illiterate women in a training center in Aleppo, and found an opportunity to continue her favorite profession through the social programs instituted by the Kilis Municipality.

Speaking Turkish has been crucial to becoming an Arabic language teacher in Kilis, and Duden was able to learn the language quickly through a course at the Ruhizade Konasi Women's Vocational Training Center.

Duden explained to an AA correspondent that she experienced some difficulties when she first moved to Kilis because she did not know Turkish.

Expressing that language is a barrier between the Kilis locals and the Syrians living in the city, Duden said:

"Kilis has accepted Syrians as their brothers and has been hosting us for six years, but our language differences ​​lead to various troubles in daily life. The women of Kilis are very enthusiastic about learning Arabic."

There has been an eager response to Duden's course, with locals hoping to learn Arabic to help bridge the language gap between Turks and Syrians in the city.

"I am aiming to fuse us together," Duden added.

Duden has said that every human being is entitled to an education, and she ultimately hopes to help educate illiterate women, despite their hardships.