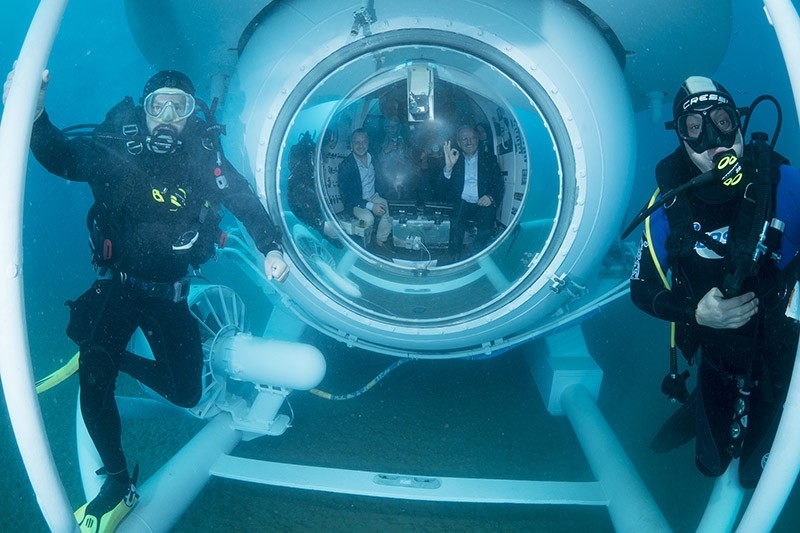 During its inaugural dive, the submarine went 20 meters under the sea near "Rat Island" off the shore of the Turkish Mediterranean city of Antalya.

Governor Karaloğlu along with his wife Sevim and his daughters Elif Meva and Meral Su participated in the two-hour long dive.

During the dive, Governor Karaloğlu said, "In Antalya, we always talk about the diversification of tourism. We are trying to move Antalya towards tourism that isn't just about resorts, sea, and sand. There is an effort right now to find alternative forms of tourism. We hope that the 2017 season will be much better than 2016."

Yunus Emre Yavuzyiğit, Sub Marine Turkey General Manager, explained that Nemo Primero was purchased from Finland, but it's modernization upgrades were performed in Spain. The modernizations took one year to complete and cost between 4.5 and 5 million euros.

The submarine has capacity of 46 people and can operate up to 110 meters under the sea. The electric powered vessle is 18 meters long and four meters wide. It weighs 106 tons and can stay underwater for up to 10 hours.

Nemo Primero is equipped with 22 observations windows that are 80 centimeters in diameter to allow for easy sea viewing, as well as mini-seats to make passengers feel comfortable.

The underwater vessel will officially be available to tourists starting on April 1. The diving cost will be about 200 Turkish lira and the tour will last one hour and 15 minutes.