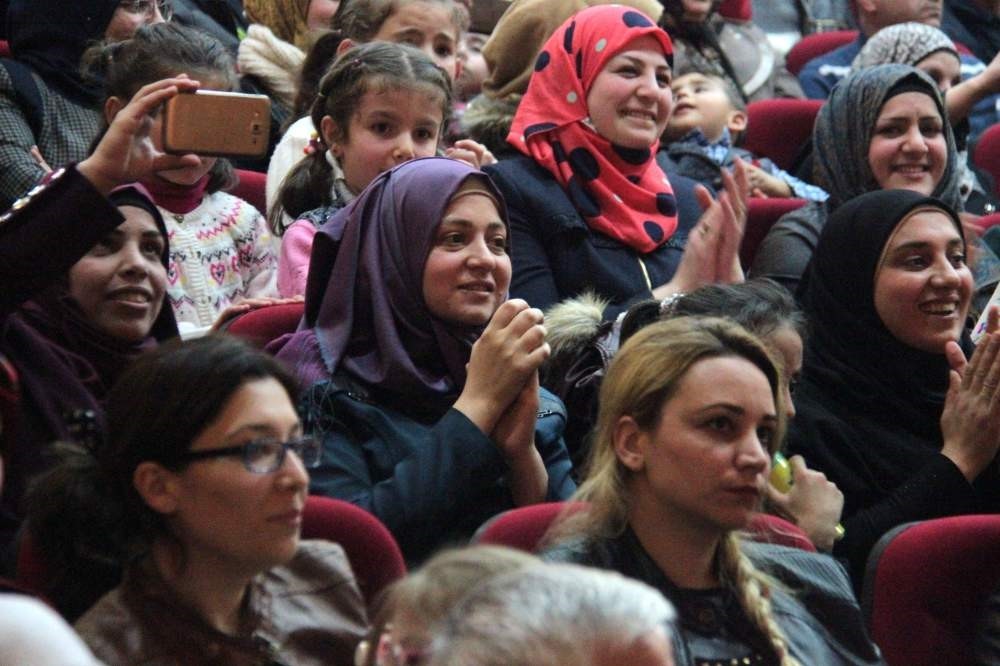 Syrian refugees sing along as the choir sings on stage.
by Compiled from Wire Services Feb 25, 2017 12:00 am
For a few hours on Thursday night, Syrian refugees who fled their war-torn country to Turkey, forgot their plight and joined a merry choir at a concert held especially for them in southern Turkey.

The Civilizations Choir of Antakya, consisting of musicians and chorists from six different sects and three monotheistic religions, promotes tolerance through music. So, the concert held in Hatay - the province where the Antakya district is located - was a fitting destination for refugees from different backgrounds. Turkey has an open-door policy for refugees fleeing from its southern neighbor.

They listened to songs in Turkish, Azerbaijani, Armenian, and occasionally sang along when the choir performed Arabic songs.

The concert was held at a culture center in Hatay, a province bordering Syria, and historically a host to a diverse array of different ethnicities and religions. The performance is part of the "Integration of Civilizations" project that aims to promote coexistence. In the concert sponsored by the local administration, the choir sang contemporary songs as well as religious hymns in four languages.

Speaking before the concert, Yılmaz Özfırat, the director of the choir, said their songs carry the themes of peace and brotherhood, and fit perfectly with the purpose of the project. "We are trying to show them that they are not alone [in their new life in Turkey]," he said.

Özfırat is also the director of a choir consisting of refugee children that is scheduled to take the stage for their first concert next month.

Turkey hosts nearly 3 million Syrian refugees and has been praised for its humanitarian aid to the displaced Syrians. A tiny fraction of refugees live in refugee camps, while the rest have dispersed throughout the country. Turkey plans to give citizenship to Syrians to help their integration into the society.
RELATED TOPICS