Turkey sticks to migrant deal, expects EU to do same 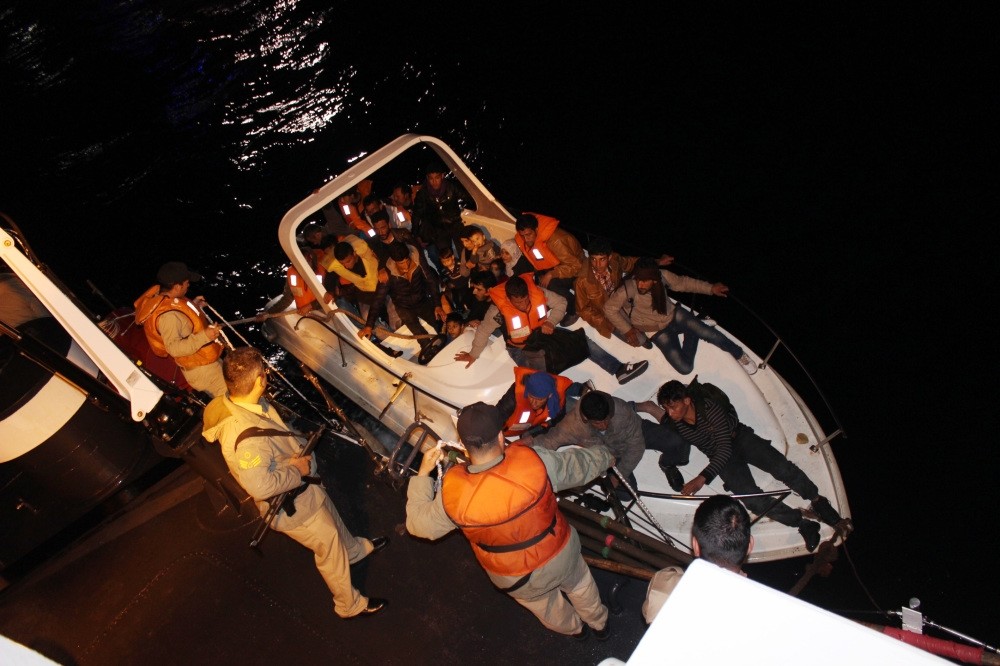 The Coast Guard pulls a group of illegal immigrants from the speedboat they boarded in the southern city of Antalya on April 7. (AA Photo)
by Daily Sabah with AA Apr 14, 2017 12:00 am

After admitting a new batch of migrants from Greece, Turkey is complying with a deal with the European Union to curb the migrant flow, and the country expects Europe to fulfill its visa-free travel pledge for Turks ‘before a final offer' on the issue soon

The number of migrants pouring into Europe via Turkey substantially decreased thanks to an agreement signed last year between the European Union and the country, which currently hosts about 3 million refugees from Syria. However, Turkey is worried about the EU's reluctance to fulfill its commitment to the deal, especially on its pledge of visa-free travel for Turkish nationals.

A new group of migrants from Greece, the gateway to Europe for tens of thousands of migrants, were returned to Turkey yesterday, the latest in the batches of migrants mandated to be returned in line with the deal. Twenty-one men from Algeria, Pakistan, Bangladesh, Ghana, Afghanistan and Morocco who snuck into Greece were taken to Dikili on Turkey's Aegean coast from the Greek island of Lesbos by ship. The migrants were among those whose asylum requests were rejected. The latest arrivals make the total number of migrants returned to Turkey 1,014.

A report released by the European Commission this week found the numbers promised in the deal have not been realized.

According to the commission's 11th Relocation and Resettlement Report, the total number of relocations stands at 16,340 since last March, far below the 160,000 goal.

For the Turkish side, a number of key European commitments remain unfulfilled, including granting Turkish citizens the right to visa-free travel in Europe's Schengen zone.

According to a European Commission report released last month, to get the visa waiver Ankara needs to fulfill seven outstanding criteria out of a total of 72, including "revising legislation and practices on terrorism in line with European standards." Turkey rejects the revision of the laws that would lead to the relaxation of strict regulations to fight terrorism, especially during a time of rising threats from multiple terrorist groups, from Daesh to the PKK.

Ankara will offer a "final" deal to the European Union on visa-free travel after Turkey's constitutional referendum, which is just a few days away, Foreign Minister Mevlüt Çavuşoğlu said yesterday.

"We will make our final offer to the EU after April 16," Çavuşoğlu said in the Mediterranean province of Antalya.

"We will then decide how to proceed and make our decisions publicly known. We need to get visa-free travel. This is part of the latest migrant deal we signed," he added.

The agreement, backed by tighter patrols of the Aegean Sea against immigrants, led to a significant decline in the number of migrants risking their lives to reach Europe. Once teeming with refugees waiting to board the first boat heading to the nearby Greek islands, the Aegean shores are now calm, save for the occasional group of illegal immigrants.

Turkey heavily criticizes the EU for dragging its feet on commitments and therefore,slowing down the process to end the migration.

The EU foresaw admitting 72,000 refugees from Turkey in line with the agreement.

On the financial side, only 750 million euros ($797 million) has been allocated so far for the care of the refugees in Turkey, far below the pledged 3 billion euros promised to the country that has been a hub for refugees from all around the world due to its position a gateway to Europe from the Middle Eastern and Asian countries.

Despite the failure of the agreement on the part of the EU, figures show that the number of illegal immigrants who sought to reach to the Greek islands closest to the Turkish shores on dinghies has significantly dropped, by as much as 97 percent.

For instance, 845,000 migrants crossed into European territories between April and December 2015 via Turkey, while that number dropped some 97 percent in the same period last year.

Only 23,650 migrants managed to sneak into the Greek islands through Turkish waters since the implementation of the EU-Turkey deal. In the past three months, the number was 2,900, a sizable drop compared to the past two years, when sometimes tens of thousands crossed into Greece monthly.
RELATED TOPICS