Presidential welcome for children of world 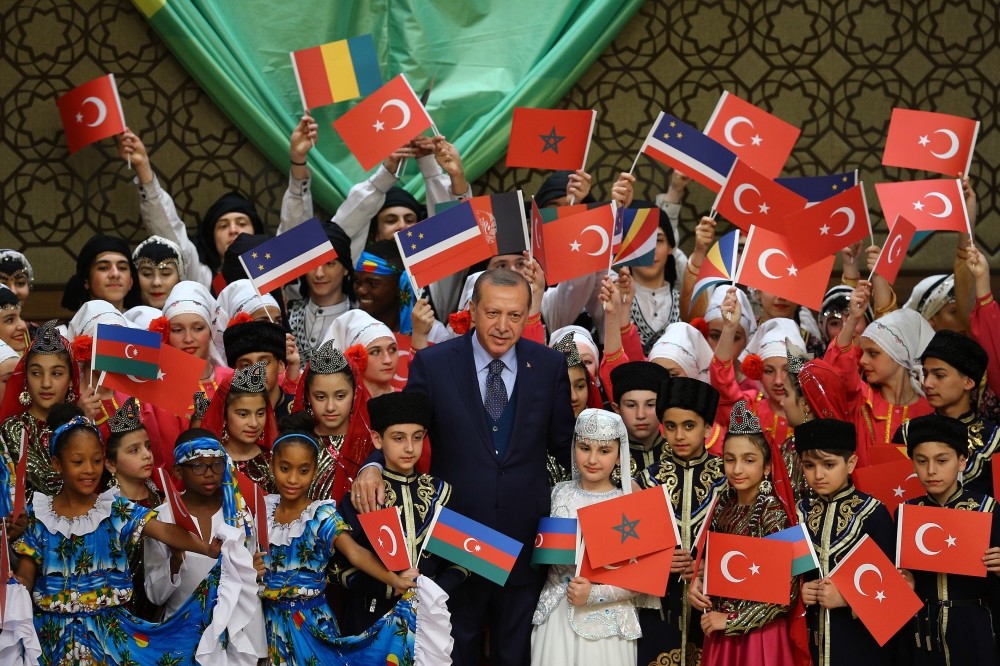 President Recep Tayyip Erdoğan hosted children from around the world yesterday on the occasion of the upcoming children's festival and delivered a message criticizing of the world's ignorance of the plight of children, especially in conflict zones

Children from around the world who came to Turkey to attend the April 23 children's festival were received by President Recep Tayyip Erdoğan yesterday. Flanked by children in traditional costumes of their countries and cultures, Erdoğan delivered a speech focusing on the problems children face and the plight of children in conflict zones, which has been ignored by the international community.

The president, known for his warm conversations with children and carrying gifts in his car's trunk to give to any child he encounters, expressed his joy to meet the children.

"I feel younger in your presence," the 63-year-old president, who is a grandfather of five, said.

Every year, children from around the world come together in Turkey on April 23 to celebrate National Sovereignty and Children's Day, the only special day reserved for children in the world.

Since 1979, TRT, Turkey's public broadcaster, has been organizing the April 23 International Children's Festival, welcoming hundreds of children from around the world. This year's festival is set to be held in the central city of Nevşehir with the theme "Children are the future."

Hundreds of children from 26 countries will both interact with their Turkish peers and perform folk dances native to their countries.

Erdoğan said the festival was unique as an event bringing the world's children together and said the congress center located inside his presidential palace would host April 23 events in the future.

He said the day was an occasion to be celebrated with joy but "unfortunately, tens of thousands of children across the world could not live to see this day," he said, referring to the young victims of conflicts, disasters and diseases.

"We have only three days until April 23 and even in that period, more children will likely suffer. I greet all the children caught in the middle of war in Syria and Iraq, facing starvation in Somalia and other African countries," he said before quoting famous Turkish poet Nazım Hikmet: "Children burnt like a paper cannot eat sweets / I knock on your door, aunts and uncles / Sign this petition / So the children won't be killed and eat sweets."

"I wish children weren't killed and don't have to pay the price for wars the adults started," he said.

Recalling his meeting with a Syrian father whose twin children were killed in a chemical attack by regime forces in Syria, Erdoğan said the world has been silent about those children.

"The deaths of those poor kids attracted attention but they are only two among thousands of children killed by chemical and conventional weapons in Syria. We work to stop these deaths. Turkey stood against this brutality and pursues efforts to end it," he said.

The president said Turkey opened its doors to 3 million Syrian refugees, a majority of whom were children. "This is something unprecedented in Turkey and we took care of them. We help those children be educated and we provide them health services. We spent $25 billion in the past six years. Unfortunately, the EU funneled in only $725 million so far," he said.

The president also requested his young guests to "remember how the children around the world live."

After the president's speech, children from Azerbaijan, Seychelles and Moldova performed folk dances at the presidential complex while a children's choir from Turkey recited a song about the victims of the July 15 coup attempt.
RELATED TOPICS