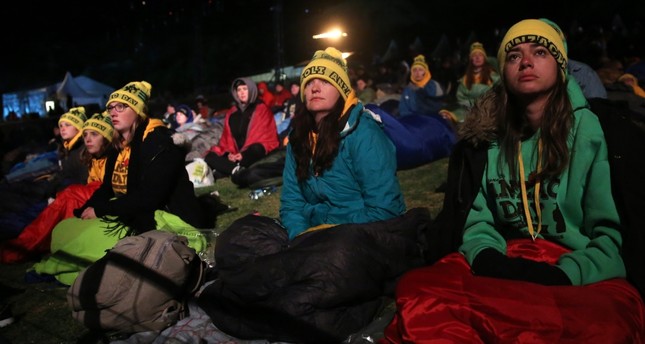 Visitors from Australia and New Zealand spent the night at the cove where ANZAC troops made first landing during World War One.

Descendants of Australian and New Zealand (ANZAC) troops, killed in a battle against the Ottomans in World War I, held a dawn service at the battlefield in Turkey yesterday. Interest in the event dedicated to the fallen soldiers was visibly low this year while Turks overwhelmingly attended another event for their war dead

A traditional dawn service for the fallen soldiers of the Australia and New Zealand Corps (ANZAC) in World War I was held in Turkey Tuesday. The event took place at the site where thousands of Anzac soldiers died in a fateful campaign against the Ottoman troops. The descendants of the soldiers as well as visitors from both countries flocked to the commemoration ceremony that was also attended by ministers from both countries. Compared to previous years, turnout was low, down to a few hundred people, who camped out on a hill overlooking the Çanakkale (Dardanelles) Strait, the stage of the fierce Battle of Gallipoli.

In another part of Çanakkale province, meanwhile, thousands of Turkish youth gathered for a march in memory of legendary 57th Regiment whose soldiers were all killed in the battle.

Australia's Foreign Minister Julie Bishop and New Zealand Justice Minister Amy Adams were among those paying tribute to the WWI casualties on the Çanakkale peninsula.

"As we gather here this morning, we each pay tribute to the men and women of our armed forces who have carried on the ANZAC tradition for the past century and more, that spirit of courage, mateship, endurance and sacrifice that has forged our national character and identity," Bishop said.

Tuesday marked the 102nd anniversary of the first landing by Australian and New Zealand troops on the Gallipoli peninsula.

"The cliff the ANZACS could not scale was the courage, discipline and tenacity of the Turkish army, determined to defend their homeland," Bishop added.

Tuesday is commemorated in Australia and New Zealand as ANZAC Day and Gallipoli is seen as one of the defining events that ushered both countries towards nationhood.

The battle also forged links between Turkey, which emerged as a modern state shortly after the war, and the ANZAC countries.

The crowds gathered at Anzac Cove as the sun rose above the peninsula for the hour-long service.

Adams thanked the Turkish people for preserving and caring for the graves of the New Zealand servicemen.

"This peninsula of war is now a place of friendship and healing," she said. "It's proof that enemies can become the truest of friends. That we have more in common than that which divides us."

"We hope it inspires those conflicts around the world where deep-rooted hatred seems impossible to overcome," she added.

Preceding the speeches, military bands from New Zealand and Australia performed hymns while a documentary on the battle was screened for visitors.

A moment of silence was observed for the fallen soldiers from both sides.

A Turkish colonel recited a letter by Mustafa Kemal Atatürk, the distinguished commander partially credited with the victory in Çanakkale against the Allied forces for which Australian and New Zealand soldiers fought.

Atatürk, who went on to become the founding father of modern Turkey and its first president, penned the letter in 1934 for the mothers of the fallen ANZAC troops.

The letter comforts the families of soldiers "who rest in peace next to Mehmetçik (colloquial name for Turkish soldiers)," and says the ANZAC troops became sons of the Turkish nation after they lost their lives on Turkish territories.

The dawn service was followed by another commemoration event at the New Zealand Monument in Conkbayırı (Chunuk Bair) where a part of the intense battle between the Ottomans and the ANZAC troops were fought.

Elsewhere, thousands of people joined a march organized by the Ministry of Youth and Sports in memory of 57th Regiment hailed for its bravery during the Çanakkale campaign at the cost of losing all its members.

The culmination of marches held simultaneously all across Turkey was in Çanakkale.

Carrying a giant Turkish flag, a crowd, including Minister Akif Çağatay Kılıç, gathered at the Martyrs' Monument dedicated to the fallen Ottoman troops.

After a recitation of prayers in memory of the soldiers, the group laid a wreath at the monument and then on the graves of the World War I soldiers buried at a nearby cemetery.

Share on Facebook Share on Twitter
Previous in Turkey More details have emerged regarding a new indictment charging the... Next in Turkey The Health Ministry has made it mandatory for medication labels to...
DAILY SABAH RECOMMENDS