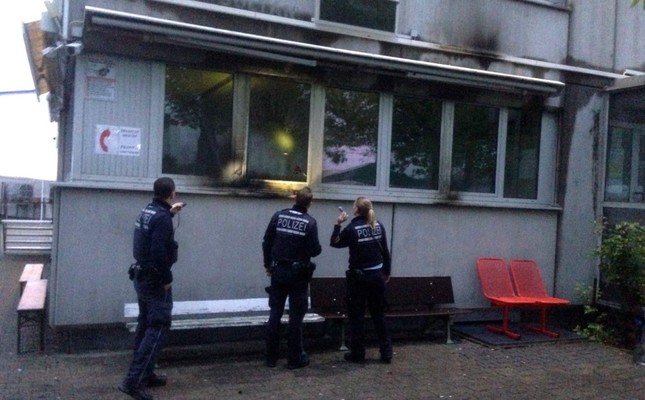 Police officers examining the damage to the mosque. (AA Photo)

Five suspects hurled Molotov cocktails at a mosque in Germany's Weil am Rhein late Thursday in the latest attack to target a Turkish Islamic place of worship in the European country. Authorities said four Molotov cocktails hit the Eyüp Sultan Mosque, sparking a small fire. Rainfall and the failure of some bottles to penetrate through the window prevented a large blaze while police launched an investigation to find the culprits.

Officials from the local branch of the Turkish Islamic Union for Religious Affairs (DİTİB), which runs the mosque, suspect it is the work of supporters of the PKK terrorist group, which conducts a campaign of violence in Turkey. Molotov cocktails are widely used in less violent attacks by the terrorist group that have killed hundreds of people in Turkey over the past two years in car bombings and suicide bombings.

Speaking to Anadolu Agency (AA), Necati Coşkun, who heads the association running the mosque, said the exterior of the mosque was damaged in the attack recorded by security cameras. He said they found out about the attack when the congregation arriving for Friday morning prayers noticed the damage. Coşkun complained that the Turkish community, especially the DİTİB, was the victim of a defamation campaign by the German media prior to the April 16 referendum in Turkey and they were "portrayed as criminals." In a bid to deter people voting "yes" in the referendum, the German media has collectively started what Ankara described as a smear campaign targeting Turks living in Germany. The DİTİB was accused of espionage for Ankara in Germany. "We have been living in peace for years here and did not harm anyone. Our mosque is never involved in politics and is neutral," Coşkun said. In another interview with Turkey's İhlas News Agency, he said the security camera footage showed one of the suspects recording the attack. "We have seen such PKK attacks in the past in Germany," he said. Coşkun did not rule out the possibility of a racist attack, pointing to the defamation campaign against Muslims in Germany.

Mustafa Yeneroğlu, a German-born Turkish lawmaker who also serves as the head of the Human Rights Committee of the Turkish Parliament, said in a written statement that Germany should take tighter measures against attacks targeting places of worship and it was "necessary to seriously fight against Islamophobia." Yeneroğlu noted that it was the "sixth attack targeting mosques in 2017 in Germany."

Mosques in Germany, where anti-Muslim sentiment that has accompanied the influx of Muslim refugees is rising, are occasionally subject to attacks, which range from Molotov cocktails to the tossing of pig's heads.

Turks, who comprise one of the largest minorities in the country with more than 3 million people, have been frequent targets of racist attacks in the formerly Nazi-ruled Germany, especially in the 1990s. The trend of attacks targeting mosques has re-emerged in recent years with the rise of the far-right in the country.

Share on Facebook Share on Twitter
Previous in Turkey Turkey has two months to prove it is the rightful owner of Guennol... Next in Turkey The discovery of the intact corpse of a czarist Russian officer in...
DAILY SABAH RECOMMENDS