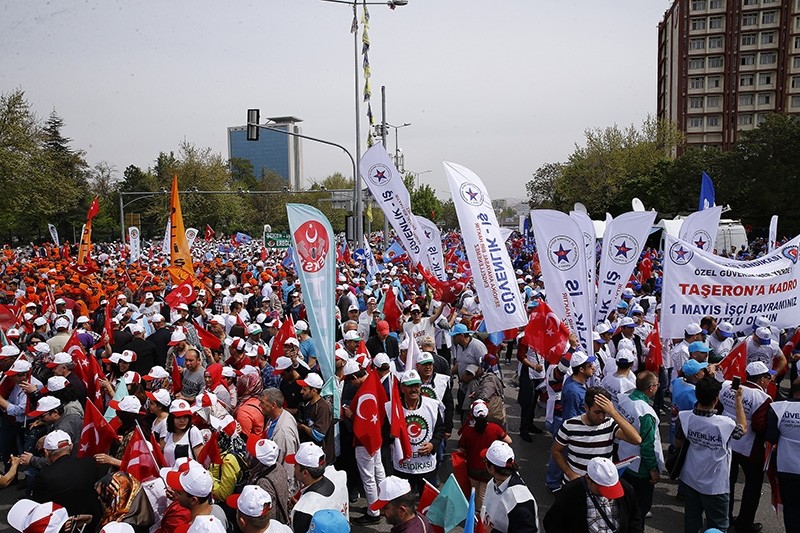 Labor and Solidarity Day, the Turkish version of International Workers’ Day, was marked with peaceful rallies calling for more rights for workers while the violence that often overshadows occasions in Turkey was absent, with the exception of minor riots

Turkey marked Labor and Solidarity Day on Monday, an occasion celebrated around the world on May 1 in honor of laborers, raising a voice for their rights. Except for minor scuffles between those seeking to incite riots, the event was marked by largely peaceful rallies across the country, unlike violent protests in past years exploited by far-left groups.

For mainly left-wing labor unions, the culmination of celebrations was in Bakırköy, a district on the European side of Istanbul, the country's most populated city. Thousands streamed into a square in the district starting from the early hours of the day, amid tight security measures. A large police presence was visible in the area as Turkey is on alert against terror threats from multiple groups. Policemen and policewomen allowed participants into the square after searching them at various checkpoints.

For far-left factions tied to terrorist groups, Taksim Square at the heart of Istanbul was once again a favorite destination. Several groups attempting to reach the square were stopped by police as no rallies were allowed at the site due to difficulty of maintaining security there. Dozens of protesters resisting the police were detained while others clashed with police en route to Taksim which was closed off to traffic and pedestrians.

Taksim Square was closed to Labor Day rallies from 1978 until 2010, following a massacre in the square in 1977 when unidentified gunmen opened fire on a crowd, leading to 34 deaths due to gunfire and an ensuing stampede and police crackdown. Rallies in 2010 were peaceful but after the ban was reinstated in 2012, protests again turned violent.

This year, labor unions gave up their insistence to mark the day at Taksim Square and opted for the square in Bakırköy.

The rallies were expected to disrupt the city's mass transit network but, with the exception of a suspension of subway services to Taksim, all mass transit vehicles operated normally, unlike in the past years when the city's most popular means of transit, the metrobus, was partially suspended.

The Confederation of Progressive Trade Unions of Turkey (DİSK), the Confederation of Public Employees' Trade Unions (KESK), the Union of Chambers of Turkish Engineers and Architects (TMMOB) and the Turkish Medical Association (TTA) along with other major left-wing trade unions and professional associations attended the Bakırköy rally. In speeches to the crowd, labor unions called on the government to boost the rights of laborers, especially severance pay.

In capital Ankara, the largest Labor Day rally was in Tandoğan Square where the Confederation of Turkish Labor Unions (Türk-İş) rallied a crowd of workers who protested the practice of businesses awarding jobs to sub-contractors which hire cheap laborers. Like in Istanbul, security measures were tight in Ankara with police deployed in busy areas.

The Confederation of Turkish Real Trade Unions (Hak-İş), another major labor union, marked the day in the eastern city of Erzurum. A surprise guest of the event was Erzurum native, Health Minister Recep Akdağ. The minister took the stage to address the workers at the event and was greeted with the applause of the crowd. Government officials usually do not attend such events though they issue messages celebrating the day. President Recep Tayyip Erdoğan, who was in India for a state visit, had released a written message the day before to honor Labor Day. Akdağ said he "noted" workers' demand at the rally as they called for permanent employment for those working on temporary contracts for subcontractors. "I will give your message to the prime minister," he said while praising workers' support for the state. "You stood against tanks while those viewing themselves as the country's elite applauded those in the tanks," he said, referring to public resistance against the July 15 coup bid last year.

The Labor and Social Security minister, meanwhile, visited workers at two factories in capital Ankara to mark the occasion and met officials of Türk-İş at the company headquarters. "Labor is sacred for us and it is what helps the development of the country. I wish a happy Labor Day for my brothers and sisters," Müezzinoğlu said during his visit to a household appliance factory in Ankara's Sincan district. "I call on employers to respect the rights of workers," he added.
Last Update: May 01, 2017 7:10 pm
RELATED TOPICS