Far from home, children build Syria of their dreams 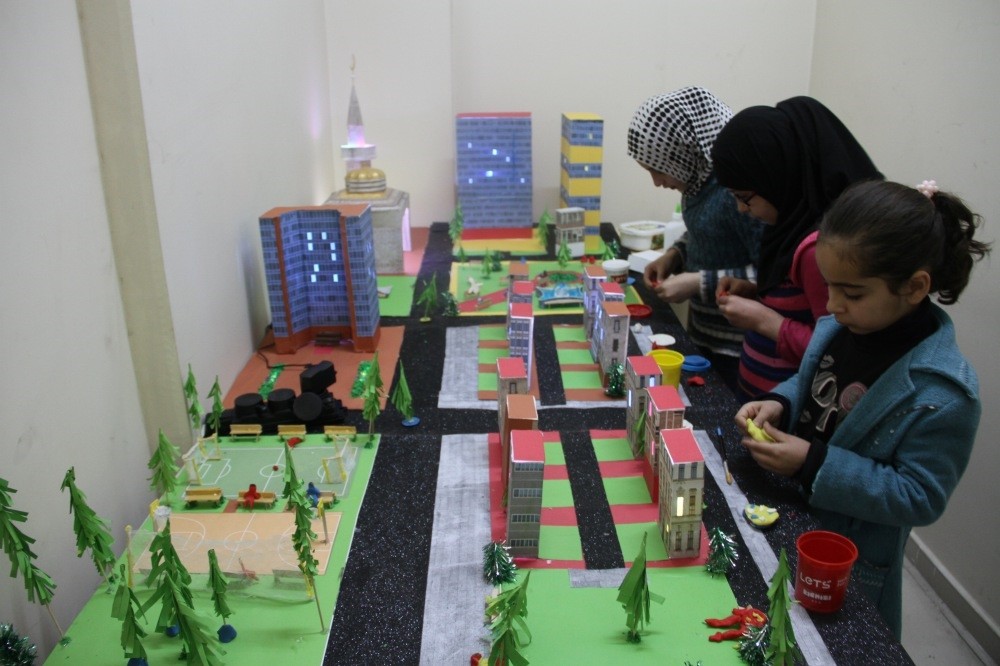 by Daily Sabah with AA May 02, 2017 12:00 am
Miniature playgrounds, apartment complexes, sports fields and parks dot a small patch of land surrounded by trees. For a bunch of Syrian children gathered in a small room at a community center in the southern city of Gaziantep, this is the Syria they dream of.

Traumatized by the ongoing conflict, they fled with their families, but now the children cling to the hope of returning home one day. Trying to forget the nationwide destruction in their homeland, the kids, with papers and clay, built a future Syria with no traces of war.

Twenty-five children aged between eight and 13 are part of a project offering psychiatric counsel to refugee children at the Ensar Community Center. On about 2 square meters, they put their skills to use by building the model Syria of their dreams.

"We had a small house back in Syria and it was nothing like the buildings we made here. I want to very much see houses like this in Syria," Ahmed, one of the children, says.

Run by the municipality of Gaziantep, a Turkish city on the Syrian border which hosts a majority of displaced Syrians in the region, the center offers arts education and language classes, apart from psychiatric counsel.

Yahya Dede, a Syrian-born tutor to the children, says the miniature Syria does not look like what the country was and is now.

"But they want to see buildings, parks and playgrounds like the ones they built here, in Syria. You can tell they are really happy building them. They are eager to build a larger miniature model," he says.

Maru Ahmed fled to Gaziantep with his family three years ago from her hometown Aleppo. She never returned since then and says she misses her country.

"I did it because I miss Syria. I hope we will have beautiful houses like we made here in the future in Syria," she says.

Safa Yasin, a Syrian boy among the "architects" of model Syria, says he added miniature "happy children" to the design.

"I designed a playground where boys and girls play together. I really missed Syria and this helped me," Yasin says.

Figures by Turkey's migration authority show that women, children and the elderly make up about 3 million Syrian refugees who have taken shelter in the country. Ankara strives to offer humanitarian services to the large number of refugees.

Syria, last month, marked the sixth year since the start of the uprising against the Bashar Assad regime that, in time, evolved into an all-out civil war as Assad forces have been violently crushing the opposition.

The number of Syrians taking shelter in Turkey, the only country in the region able to accommodate the huge influx of refugees, peaked in 2014 as the figures by the migration authority indicated. With no end in sight to the conflict, where new actors such as the terrorist group Daesh emerged, more Syrian refugees can be expected to head to Turkey.

Children are particularly vulnerable to the impact of the Syrian conflict. Even if they survive the attacks and manage to flee to safety in other countries, a gloomy future awaits them if they are not assisted.

Education is a main concern as displacement forces them to drop out of school, while the scars of the war that killed hundreds of thousands will likely remain with them for the rest of their lives. Turkey provides psychiatric counsel and education for children in refugee camps along the border though the camps are home to only a small fraction of the refugees.

For those outside the camps, social support is provided both by the government and charities, while the Education Ministry seeks to reach out to more children to enroll them at schools.
RELATED TOPICS