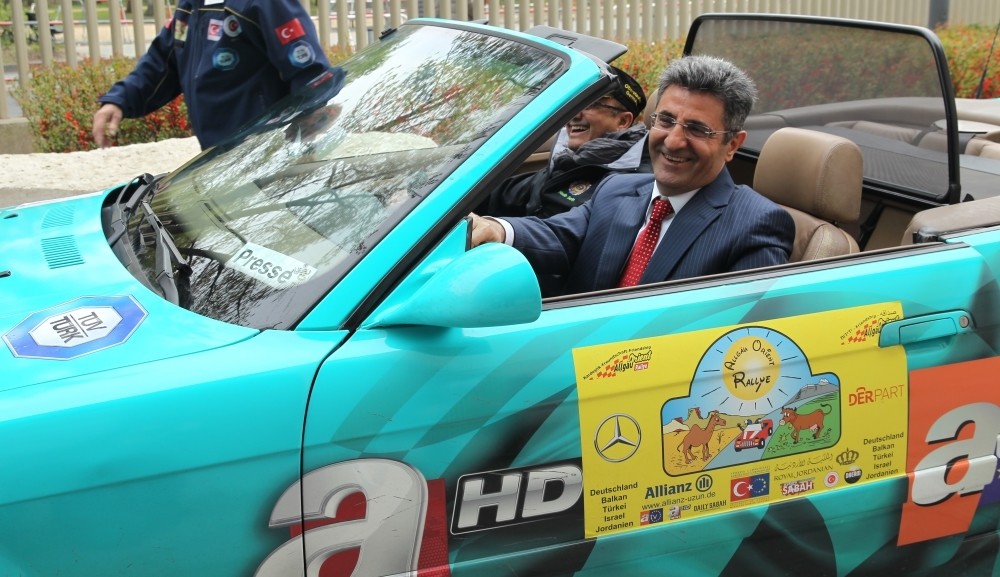 Turkish Ambassador to Berlin Ali Kemal Aydu0131n drives a rally car at a press conference to introduce the rally on April 21.
by Daily Sabah May 02, 2017 12:00 am

The 12th edition of a transcontinenal rally sponsored by Daily Sabah will set off from Germany on May 7 to promote peace and friendship. Some 400 participants from 11 countries will traverse Europe and head to the final destination of Jordan before a stopover in European countries and Turkey.

The Allgaeu-Orient rally is not a racing event per se, but rather serves as a platform for bringing together people from different countries. It was organized by an association bearing the rally's name, which was founded in Germany's Oberstaufen by a group of German and German-Turkish citizens. The rally traditionally starts from Oberstaufen and ends in Jordan.

The rally will run for more than three weeks and a special event is scheduled to be held in Istanbul during its Turkey leg. Nadir Serin, one of the co-founders of the event, said in a recent press conference that the rally had multiple purposes and for Turkey, it also meant promoting tourism as participants from various countries will take a tour of Turkey, from Istanbul to Antalya in the south as well as border cities. He said about two-thirds of the rally will take place inside Turkey. Drivers are set to arrive in Turkey on May 10.