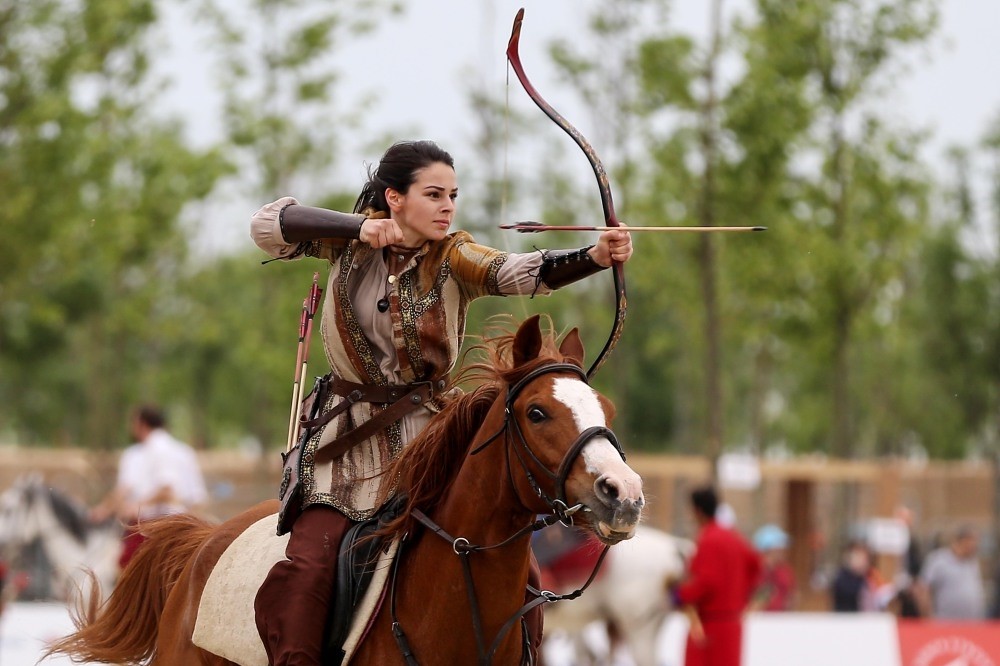 Female archers displayed their skills at Friday's events while riders performed stunts. (AA Photo)
by Daily Sabah May 13, 2017 12:00 am

The Ethnosports Culture Festival in Istanbul is attracting visitors interested in ancient, ethnic sports and culture as the four-day festival kicked off on Thursday, with an even larger turnout expected over the weekend

Archers flex their arms and reach for their arrow, riders gallop past each other as they race to catch a goat and, in another corner, wrestlers size each other up while women in Turkic costumes welcome visitors to their yurt. This is the Ethnosports Culture Festival that made its grand opening on Thursday. On its second day on Friday, the festival attracted more to its venue at Istanbul's Yenikapı Square and organizers expect more over the weekend with the closing day on Sunday.

Though its motto is "The Arrow has Left the Bow" in reference to a Turkish saying meaning things are past the point of no return, the festival offers more than Ottoman and Turkic archery, the ancient sport that lived to see a modern revival.

Friday's highlight was a team of horseback riders performing acrobatic stunts. Between the 11 sports events held throughout the day, visitors flocked to yurts where traditional dishes are served. Those not interested in sports streamed into the yurts and toward the stands where ancient Turkic handicrafts are on display. Elsewhere, children's plays were staged and folk dance troupes performed. 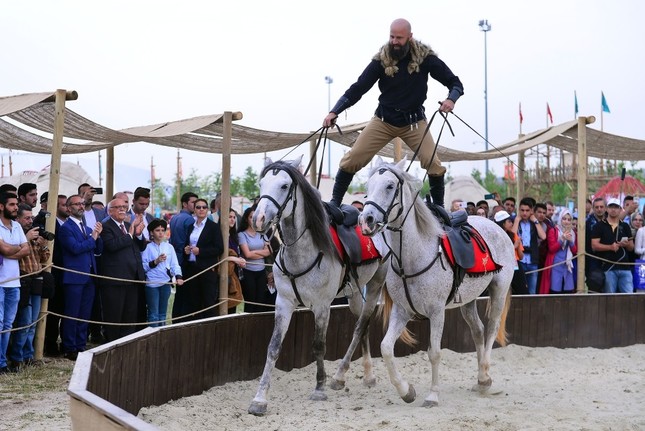 Oil wrestling, added this year to the festival's programme, also enticed its enthusiasts, as 49 wrestlers vied for the top title in a three-stage event, before Mustafa Batu grabbed "head wrestler" title by putting his opponent's back on the ground in the finals.

The festival aims to promote and revive sports and cultures unique to ancient Turkic life as well as to other cultures with a total of 843 athletes competing in 11 different sporting categories.

In gökbörü or kökbörü, a traditional equestrian sport of Central Asia, riders on horseback will try to catch a runaway goat by sliding on their saddles. In belt wrestling, which has been popular among Crimean Turks for centuries, wrestlers will try to put their opponent's shoulders on the ground by pulling on a belt wrapped around the opponent's waist. Another unique sport originating from Central Asia, aba wrestling is one of the oldest wrestling forms in the world. To compete, wrestlers will don an "aba," a coarse woolen cloth, while trying to beat their rivals in this rare and historic Turkic sport. In yet another Central Asian Turkic sport, mounted javelin, which was originally created for mounted combat practice, sees contestants on horseback try to hit their opponents with javelins.

In the 42 yurts set up across an 800,000-square-meter venue, ancient rituals that have survived for centuries, such as the celebration of a child's birth, will be performed. The festival also includes 30 rare artists from various traditional seldom-practiced art forms. In a section dedicated to children, young visitors will be introduced to mangala, a centuries-old board game. The youngsters will be given pony rides and theater companies will perform plays for them.
RELATED TOPICS