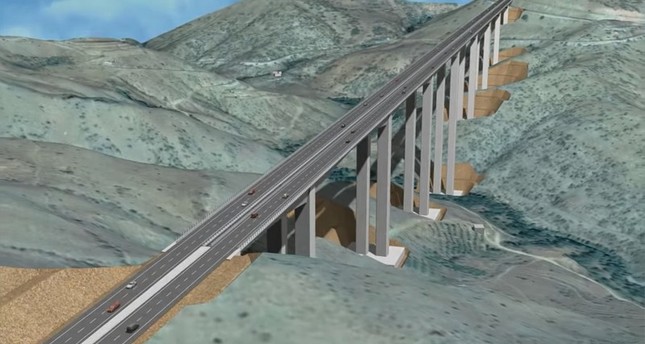 A new viaduct, which is a low series of arches creating a bridge-like structure, is set to be constructed over the Taurus Mountain range, and is projected to be the tallest viaduct in Turkey and the second-highest in the world.

The Eğiste Viaduct in south-central Turkey's Konya will be constructed across eight piers, with the highest pier planned to reach the height of 166 meters.

The 1,372 meter-long viaduct will shorten the existing road, which is some 4,400 meters long, and aims to increase road safety.

Ahmet Hadimioğlu, mayor of Konya's Hadim district, told Anadolu Agency that the viaduct would shorten the distance for travelers going between Konya and Alanya.

"The Eğiste Viaduct Project, which will cost 220 million Turkish lira ($64 million), is the largest investment in our district. The time it takes to travel between Konya and Alanya will shrink to two hours with the completion of this project," Hadimioğlu said.

"The bridge will be the shortest way to travel between the central Anatolia and Mediterranean regions of Turkey," the mayor added.

Share on Facebook Share on Twitter
Previous in Turkey What started out as a rare chance to have a prank photo ended with... Next in Turkey Security forces intercepted 150 Syrian refugees who boarded a fishing...
DAILY SABAH RECOMMENDS