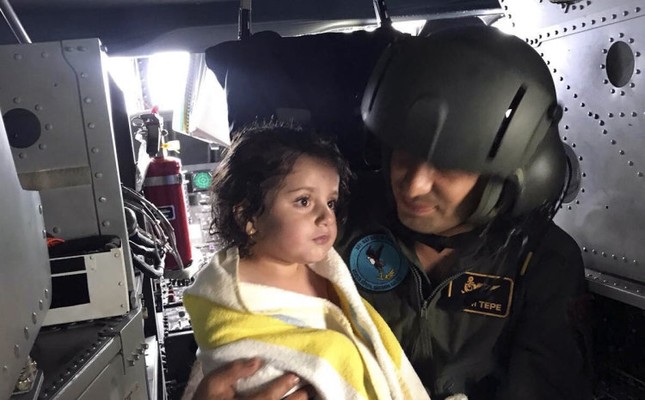 Four-year-old Liya's parents thanked the Turkish Coast Guard for evacuating them to safety after 24 Iraqi migrants perished in a sinking boat last week. Liya's photo in the arms of a Coast Guard officer made headlines in the Turkish media highlighting the plight of migrants seeking to reach Europe via Turkey.

Azez Mustafa Shamal and his wife Shoxan Abdullah visited their young daughter at an intensive care unit where she is being treated in the northwestern Kocaeli province. Shamal and his family were among more than 40 people huddled in a small boat traveling to Romania from Kocaeli before their overcrowded boat sank. The couple's 3-year-old boy Lawend was among the victims. After he saw his daughter, Shamal told reporters they were grateful for the Turkish soldiers for rescuing them although their dream of traveling to Britain from Romania ended in disaster. Shamal, a construction worker, said they first traveled to Istanbul from Iraq and contacted a human smuggler there. "After we boarded the boat, the weather got worse. Big waves were rocking the boat and soon, it was torn apart. We had life vests and we tried to grip our children once we fell into the sea. We clung to pieces of the boat," he told Anadolu Agency (AA). "We feel sad for our boy but we find solace in Liya's rescue. Turkish troops worked hard to save us. May Allah bless them," Shamal said. The family now plans to return to Iraq once Liya recovers.

It was the death of another migrant child two years ago that put a face to the tragedy of migrants risking their lives to reach Europe from the conflict-ridden Middle East. The image of Alan Kurdi, a 3-year-old Syrian boy who died in a sinking boat, stirred up emotions in Europe and accelerated a deal to curb the migrant influx to Europe between the EU and Turkey. The number of migrants in a perilous journey across the Aegean Sea significantly decreased after the deal went into force last year. Nevertheless, migrants recently started taking up a new route to Europe. Through the Black Sea, they increasingly try to reach Romania, their new gateway to Europe, which still bickers on quotas for migrants amid the rise of the far-right. The Turkish Coast Guard intercepted 834 immigrants in seven separate cases between Aug. 13 and Sept. 9 off the Black Sea coast and detained 10 human smugglers. Security forces also intercepted 237 immigrants before they could board boats.

Share on Facebook Share on Twitter
Previous in Turkey A mortar attack by PKK terrorists targeting a gendarmerie outpost... Next in Turkey Turkey has removed three television channels based in northern Iraq,...
DAILY SABAH RECOMMENDS