Heart outside, life passion inside for 'miracle' Syrian girl 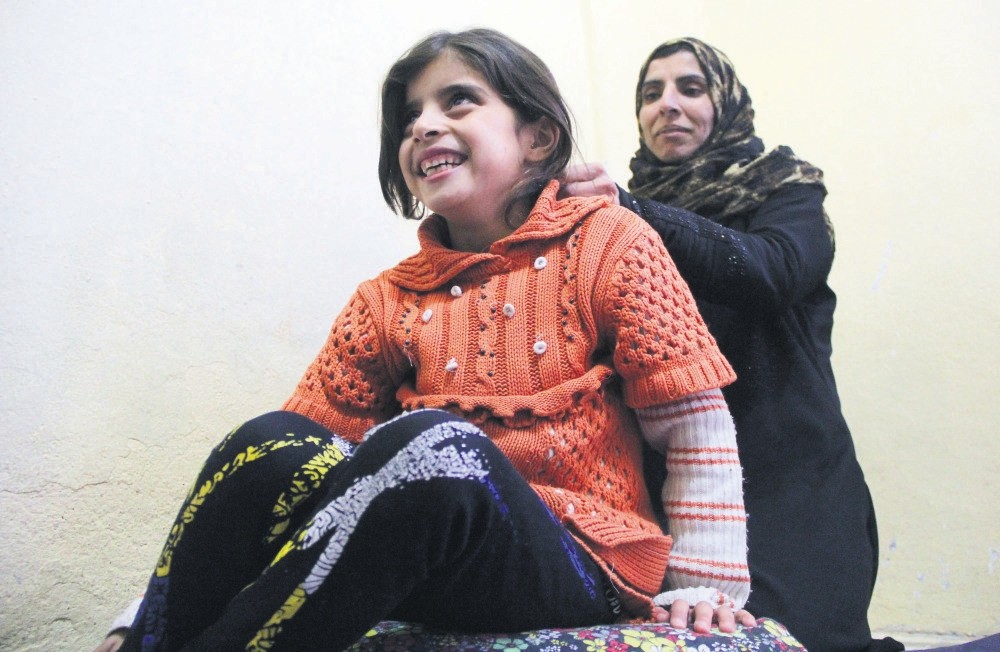 Ahlam with her mother. Her chances of survival were u2018slim' according to doctors, but the girl survived both her rare condition and bomb attacks in her war-torn homeland.
by Daily Sabah with AA Dec 12, 2017 12:00 am

Born with a very rare disorder in which her heart is outside her chest, Ahlam Alasad has stunned doctors by surviving for seven years, and the Syrian girl, who has already survived airstrikes in her homeland and is considered a medical miracle by Turkish doctors is now awaiting for surgery to fully correct the disorder

Only one in up to 8 million children born with ectopia cordis live, but Ahlam Alasad was apparently determined to survive. The 7-year-old Syrian girl with a heart beating outside her chest due to this rare condition escaped airstrikes and bomb attacks in war-torn Syria. The attacks killed her father in their hometown Aleppo, but she and her mother managed to take shelter in Turkey.Due to her condition, she can only do limited physical activities as any wrong move may injure her vulnerable heart and ectopic intestines. The girl, who is staying in the southern province of Hatay, a hub for refugees from Syria, is looking forward to the surgery and a full recovery. Doctors believe she has a long life ahead of her if she can receive the proper care. Normally, doctors recommend abortions to most expectant mothers carrying fetuses diagnosed with the condition.

Ahlam, her mother and four siblings live in a home they rent with the help of a local charity. The impoverished family counts on the benevolence of the Turkish public for the surgery that they could not have had back in Syria due to inadequate hospitals.

The little girl is closely monitored by her mother, Maimunah Alasad, who fears her heart, covered only with thin skin, may be damaged if she plays outside. Speaking to Anadolu Agency (AA), the mother said she always thought her daughter had a common condition and found out that Ahlam's survival was pure chance when she visited doctors in Turkey after they arrived some two months ago. "She was in intensive care for 15 days after her birth. The doctors in Syria told us she should be operated on, but they did not have means to operate on her. They told us to be extra careful because Ahlam's heart could be damaged if she falls or bumps into something," she said. The Turkish charity helped them arrange a meeting with doctors in Turkey, and it was there she was diagnosed with ectopia cordis. "The doctors here were really astounded when they saw she survived," she recalls. Maimunah, who makes a living by doing odd jobs, said she cannot afford the surgery and post-op care, but it is her "only wish" to see Ahlam healthy again.

Ahlam is usually quiet but always wears a smile. She says she is "not scared" of the sight of her heart but "fears" she can hurt herself while playing. "I only want my health back," she says.

Associate Professor Tülin Durgun Yetim of Mustafa Kemal University in Hatay is among the team of doctors who diagnosed Ahlam's condition. "This is a rare condition and usually only seen in girls. It has five different types and for Ahlam, she needs an extra skin transplant. She would also need artificial bone to correct the deformity," she says. Yetim says Ahlam is "very lucky not to have any internal deformity in her heart."

"Generally, children with ectopia cordis are stillborn and in other cases, doctors recommend abortion because those children have little chance of survival. A surgery can be performed only after the age of 2 and still, they have a slim chance of survival. Ahlam is definitely a miracle," she said.