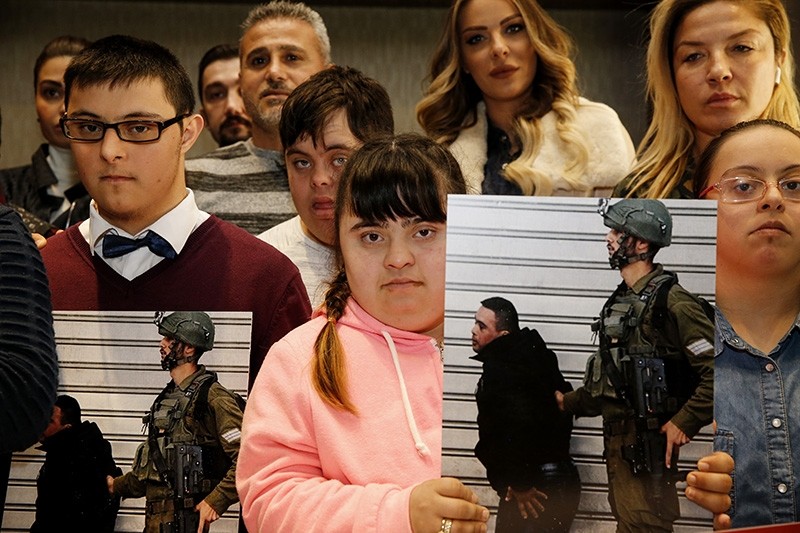 Members of the Turkey-based International Down Syndrome Federation (UDF) show a picture of 14-year-old Palestinian Muhammed et-Tavil who was taken into custody by Israeli soldiers. (AA Photo)
by Anadolu Agency Dec 12, 2017 12:00 am

Turkey-based International Down Syndrome Federation (UDF) on Tuesday denounced the arrest of a Palestinian teenager by Israeli soldiers in West Bank's Al-Khalil district.

Mohamed al-Taweel, 14, who is affected by Down syndrome, was arrested Friday during protests against U.S. President Donald Trump's decision to recognize Jerusalem as Israel's capital.

Speaking at a meeting in Istanbul, Muhammed Abdullah Tuncay, the federation's head, said that pictures of the arrest, which went viral on the internet, portrayed "the end of humanity."

"Rude behavior shown to a young boy with Down syndrome, to our son, and his arrest is actually a country's insult to humanity," Tuncay said.

Tuncay said he had contacted the Palestinian embassy in Ankara for information about the boy.

"The child is in custody [of Israeli soldiers]," he said, adding that the embassy will keep them updated.

He said the foundation will bring the boy and his family to Istanbul and provide them with psychological and social support.

They will campaign for his release, he said, adding that he hoped Israeli soldiers and authorities will apologize for their mistake.

Tuncay said that Israel has been torturing and persecuting children in Palestine for years.

Millions of people around the world and about 100,000 people in Turkey have Down syndrome, a genetic disorder which is typically associated with physical growth delays.

UDF, a nonprofit organization with 30 member countries, aims to provide vocational training and employment to people with Down syndrome.

Tension has mounted across the Palestinian territories since Trump officially recognized Jerusalem as Israel's capital last Wednesday, drawing condemnations from across the Arab and Muslim world.