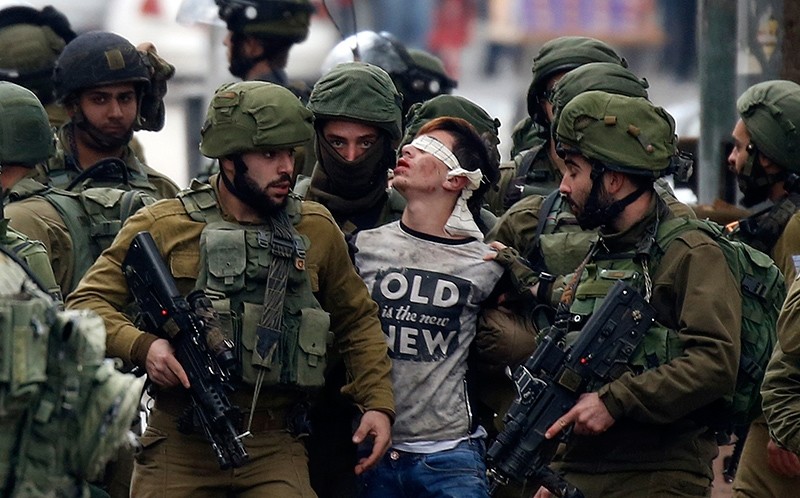 A Turkish rights group is demanding the immediate release of Fawzi al-Juneidi, a 16-year-old Palestinian whose photo of being dragged away blindfolded by several Israeli soldiers has become a symbol of Jerusalem protests.

"Palestinian children detained and arrested by Israel are subjected to various forms of torture and cruel treatment, such as blindfolding and physical violence in the form of handcuffing, beating, starving, swearing and insults, threatening them with their mothers being hurt, harassment, being forced to sign paperwork in Hebrew, and psychological pressure," iHAK said.

Juneidi was detained by Israeli soldiers last Thursday when he was passing near them during protests condemning U.S. President Donald Trump's recognition of Jerusalem as the capital of Israel.

According to the photographer who took the now-iconic photo, Wesam al-Hashlamon, Juneidi was violently beaten by scores of Israeli soldiers.

As the eldest of seven siblings, Juneidi has been working since a young age to look after his bedridden father and terminally-ill mother.

According to Palestine's official statistics agency, 14 Palestinian children have been killed this year by Israeli forces in the occupied West Bank and the blockaded Gaza Strip.

Meanwhile, the Turkey-based International Downs Syndrome Federation (UDF) on Tuesday denounced the arrest of a Palestinian teenager by Israeli soldiers in the West Bank's Al-Khalil district.

Mohamed al-Taweel, 14, who is affected by Downs syndrome, was arrested on Friday during protests against U.S. President Donald Trump's decision to recognize Jerusalem as Israel's capital.

Speaking at a meeting in Istanbul, Muhammed Abdullah Tuncay, the federation's head, said that pictures of the arrest, which went viral on the Internet, portrayed "the end of humanity."

"Rude behavior shown to a young boy with Downs syndrome, to our son, and his arrest is actually a country's insult to humanity," Tuncay said. Tuncay added that he had contacted the Palestinian Embassy in Ankara for information about the boy.