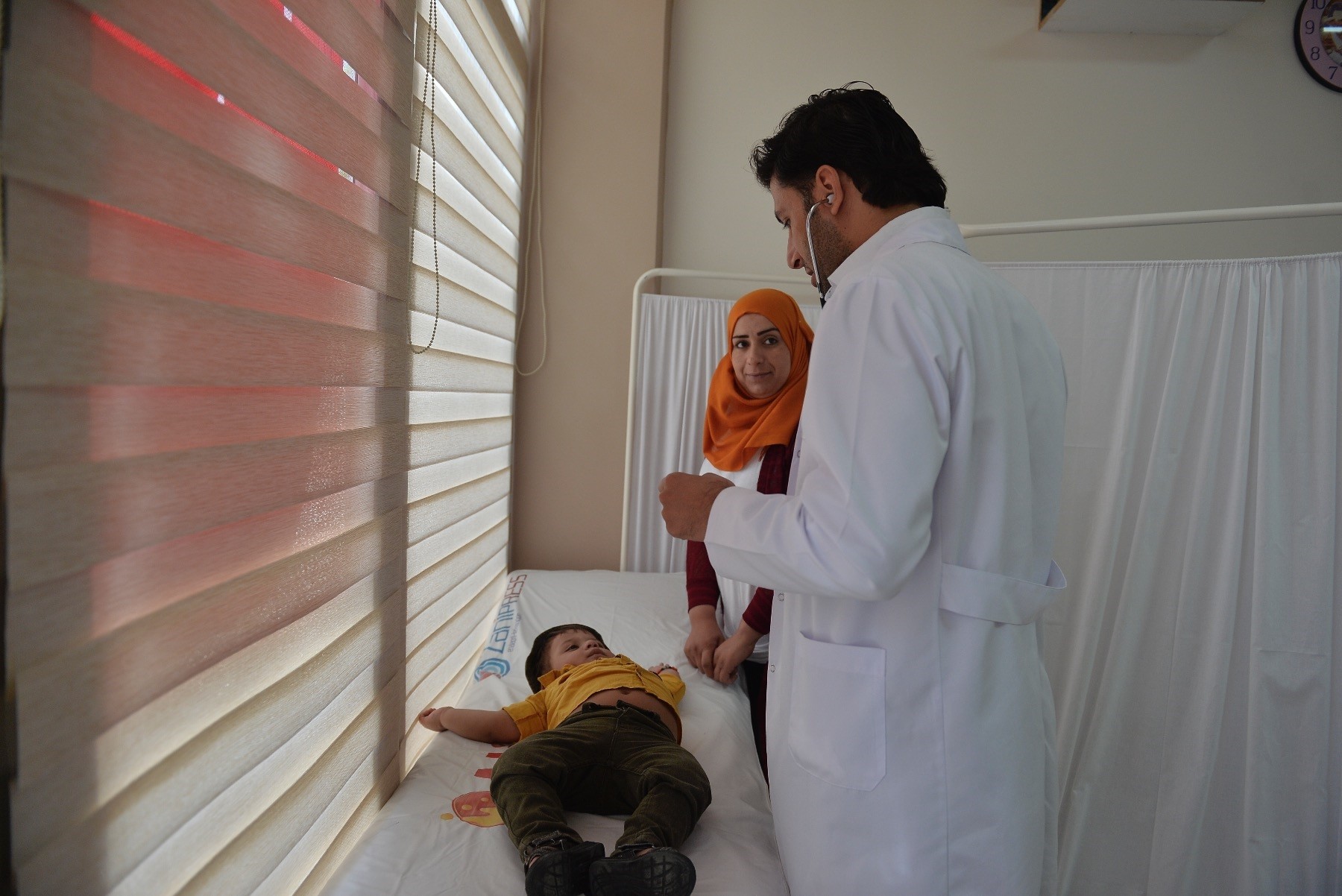 A Syrian doctor at Artuklu health center for Syrians attends to a patient.
by Daily Sabah with AA
Jul 05, 2018 12:00 am

Striving to help thousands of Syrian refugees overcome the language barrier, a major problem for many, Turkey has started staffing clinics with fellow refugees.

Four Syrian refugee doctors, two nurses and four sanitation employees are working at two healthcare centers in the southeastern province of Mardin, Saffet Yavuz, a local health bureau chief, told Anadolu Agency (AA). He said two more healthcare centers will soon be set up in the province's Midyat and Nusaybin districts. Under a project by the Health Ministry and the European Union, Bab-i Şifa Refugee Healthcare Centers opened in February in Mardin's Kızıltepe and Artuklu districts.

"I wish we could have done this in our country, but there are hostilities there," said Dr. Abdullah el-Hatip from Damascus, who is working at the Artuklu center. "Now we're helping [refugees like us] here. God willing, we hope the war will soon end, and we'll do the same in our country," he added, expressing thanks for all the support Turkey has given the refugees.

Syria has only just begun to emerge from a devastating civil war that began in 2011. Since then, hundreds of thousands of people have been killed in the conflict and millions more displaced, according to the U.N. Turkey currently hosts nearly 3.5 million Syrian refugees, more than any other country in the world.

Emane Hedi, who took shelter in Turkey three years ago after fleeing Syria's Hasekeh, is among the patients at the center. She says they were pleased with the health services in Turkey. "May Allah bless Erdoğan. He extends a helping hand to everyone without discrimination," she says, referring to President Recep Tayyip Erdoğan.

With over $30 billion spent for the well-being of Syrian refugees, Turkey tops the list of countries restoring the health of refugees worldwide with the cost of health services surpassing $10 billion, according to the World Health Organization (WHO). Along with free access to services provided by public hospitals, refugees also benefit from clinics set up at the refugee camps near the Turkish border. The Health Ministry occasionally conducts vaccination campaigns as well with charities offering free medical check-ups, especially for those living outside the camps. Recently, Turkey also joined forces with the WHO to train hundreds of Syrian doctors and nurses to overcome the language barrier to help refugees trying to access health services and to boost health literacy and awareness of diseases for refugees.

A recent survey shows some 60 percent of refugees do not have health literacy or were reluctant to use the services due to language barriers and other cultural reasons. War-related health conditions also take a toll on the refugee population. Some 27 percent of refugees are smokers, and another 80 percent suffer from sleep disorders.

As the conflict in Syria intensified and the prospect of a return for the refugees to their country dimmed, Turkey has stepped up its efforts for further refugee integration. Work permits were granted to the "guests" - the term informally used by the government to reference the refugees - and since 2016, more than 380 Syrian doctors, and 360 nurses and midwives have been trained to serve their expatriates in hundreds of clinics serving the refugees across Turkey.