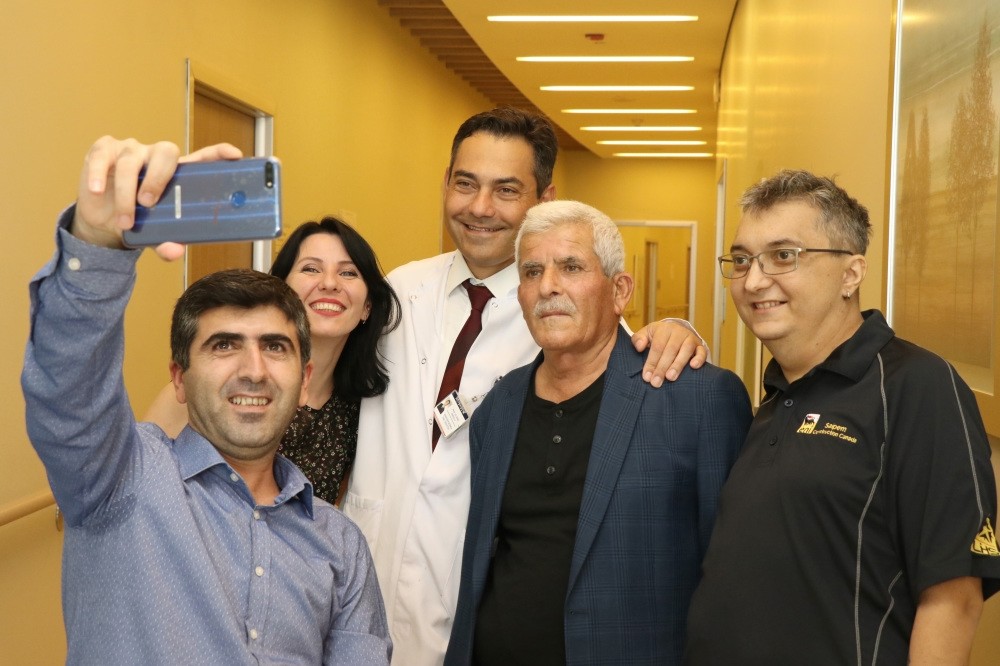 A paired liver exchange transplant helped a Ukrainian couple and a father and son from Turkey cling to life and hope. Two families met in Istanbul where the exchange took place

Living more than 2,760 kilometers apart, the Önal and Pavliv families never thought their fates would intertwine. Thirty-nine-year-old Mykola Pavliv, a theater director from Ukraine's Lviv was diagnosed with cirrhosis last year; he was able to cling to life with a liver transplant from İzzet Önal, the son of Süleyman Önal who was also in need of a liver transplant. In exchange, Pavliv's wife Larysa donated part of her liver to Süleyman Önal. The two families met at Acıbadem Atakent hospital in Istanbul where the exchange took place.

The Pavliv family had sought treatment abroad and went to Italy first, but doctors told them the transplant could not be made due to blood incompatibility. After a lengthy search, they found doctors in Turkey could carry out a paired exchange transplant.

Doctors located Süleyman Önal, a native of the southeastern Turkish province of Hakkari, who was awaiting a transplant at a hospital in the eastern city of Van. When the Önal family approved the exchange, the two families met at an Istanbul hospital. Though they did not speak the same language, Mykola Pavliv and Süleyman Önal, quickly got along through body language and with the help of interpreters. After successful surgeries, Önal and Pavliv were discharged from the hospital yesterday.

"I've never been to a hospital until last year and was baffled what to do when I was diagnosed with cirrhosis. It was a difficult period for me and the doctors here were my last hope though I believed everything would be fine," Pavliv told Anadolu Agency (AA). The Ukrainian man had been to Turkey twice for vacation. "This time, I am here for my health and thankfully, regained it. I will leave Turkey as a happy man," he said. He added that he would keep in touch with the Önal family through social media.

Süleyman Önal, who discovered his illness after he was hospitalized four years ago after a car crash, says humanity is beyond all differences. "I was surprised when I learned that the exchange will be with a Ukrainian family. When I met them for the first time, I hugged them," he said. "It is a great luck for me. You don't expect someone from Ukraine to be [your donor]," he said.

Professor Remiz Emiroğlu, the head of the hospital's liver and kidney transplant unit said paired exchange is a complicated operation. "Paired exchange in kidney transplant is common but liver transplant is a different thing. It is risky and long. We explained the risks to the Pavliv family but they accepted it without hesitation. Süleyman was warm to the idea too. We have a large team working on transplants here and everyone worked in the surgery. It was simultaneous and both surgeries lasted for about ten hours. It went without problems and we did not see any complications after the surgeries," he said. Emiroğlu said both patients were "in good spirits." "It is not an easy task to be operated on in a country you are foreign to and in a surgery with vital risks, but our patients were cheerful people and they are happier now. The will to live helps people in such situations," he said.

The professor said that the ideal way for transplants was taking organs from cadavers but Turkey lagged behind other countries in terms of organ donation. "We have a long waiting list for transplants. Chronic liver patients have no chance other than transplants to recover, unlike kidney patients who can survive on dialysis," he added.