Activists rally for release of Saudi writer missing at consulate 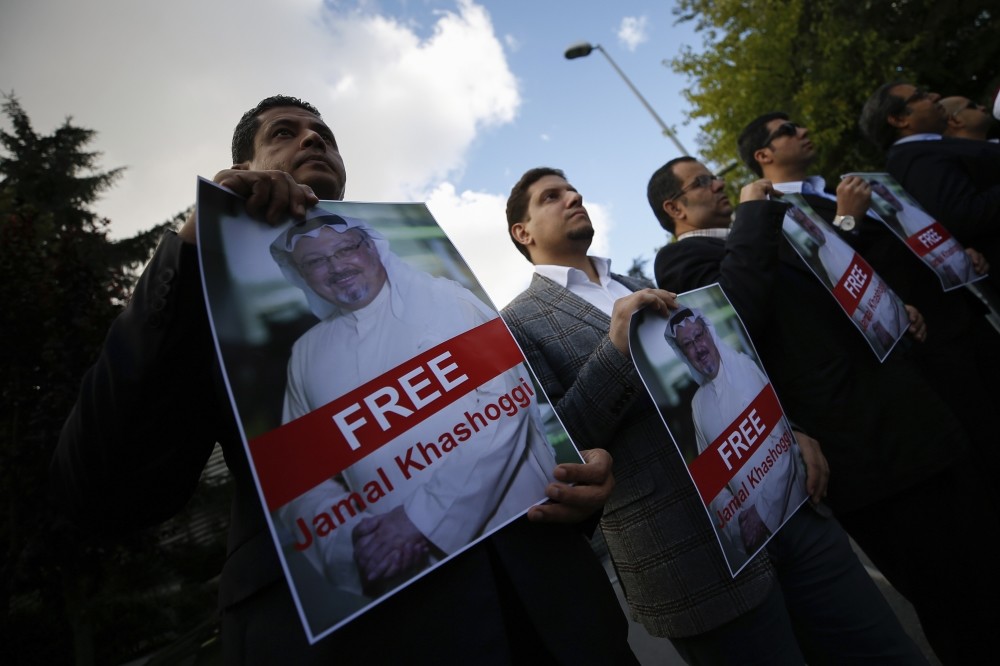 A group of activists, journalists and friends staged a rally outside the Saudi Consulate in Istanbul on Friday calling for the ‘release' of Jamal Khashoggi, who they believe is being held in the consulate, three days after the critic of the Saudi regime disappeared at the compound

The disappearance of Jamal Khashoggi, a 59-year-old Saudi columnist known for his views critical of the Saudi regime, remains a concern for his colleagues who staged a rally outside the Saudi Consulate in Istanbul on Friday. Khashoggi was last seen entering the consulate on Tuesday and mysteriously disappeared, though consulate officials claim he disappeared after exiting the building.

"We believe he is a 'guest' at the consulate. If this is the case, [the consulate] should let their 'guest' go," Turan Kışlakçı, a Turkish journalist and friend of Khashoggi told reporters after reading a statement on behalf of the nonprofit Turkish-Arab Media Association, which is monitoring the case.

Khashoggi was at the consulate to acquire paperwork regarding his divorce from his Saudi wife and to marry a Turkish woman, who was first to break the news about his disappearance. The woman told reporters that Khashoggi asked her to alert friends if he did not return, apparently worried about being held there; though it was his second visit to the consulate in weeks for routine paperwork.

Turkish officials disputed the account of Saudi consulate officials regarding his disappearance. Presidential Spokesman İbrahim Kalın said earlier that they believe Khashoggi is still in the consulate. Saudi Arabia's ambassador in Ankara was summoned to the Turkish Foreign Ministry for an explanation over the incident, while Saudi officials announced they were coordinating with Turkish authorities about the circumstances of his disappearance.

The statement made by demonstrators said they contacted the embassy and consulate but neither provided satisfactory or clear statements on the matter. "We don't know whether he is alive or dead. Saudi Arabia's statements in this direction are far from satisfactory. Saudi Arabia is a large country with particular significance for the Islamic world. Our hope is that this country is not responsible for the claims that were made against it in digital, written and social media. Khashoggi is a man who loves his country. He had trust in the consulate of his homeland. Although he supported many reforms of heir Prince Muhammad bin Salman, he had some critical views, which he expressed only for his country's interests. He was not against [the prince] but had suggestions for improvements to foreign policy in his country," the statement said.

Yemeni activist and 2011 winner of the Nobel Peace Prize Tawakkol Karman was among the demonstrators and hit out at the Saudi authorities. She told Agence France-Presse (AFP) that she believed Khashoggi "was kidnapped in this gangster's den that is supposed to be a consulate." "What we want is Jamal Khashoggi's release. He entered the building of the consulate; he has to come out of there safe and sound. And the Turkish government must assume its role and deal with the case of Jamal Khashoggi because Turkish sovereignty has been violated," she added.

The Washington Post, where Khashoggi penned columns, printed a blank column in its newspaper Friday in solidarity with journalist. The newspaper's editorial board called on Prince Mohammed bin Salman to ensure he "is free and able to continue his work."

"His criticism voiced over the past year most surely rankles Mohammed bin Salman, who was elevated to crown prince last year and has carried out a wide-ranging campaign to silence dissent while trying to modernize the kingdom," the Post editorial read. "Among those in his prisons for political speech are clerics, bloggers, journalists and activists. He imprisoned women who agitated for the right to drive, a right that was granted even as they were punished."

The Post's empty column in Friday's edition bore Khashoggi's byline and the headline: "A missing voice."

Speaking to reporters after reading the statement, Turan Kışlakçı said they would continue their rallies until Khashoggi's release and similar rallies would be held across the world. Referring to rumors that "a black car" took Khashoggi from the consulate to an unknown location, Kışlakçı said they could not confirm this, and they believed he was being held in a room in the consulate.