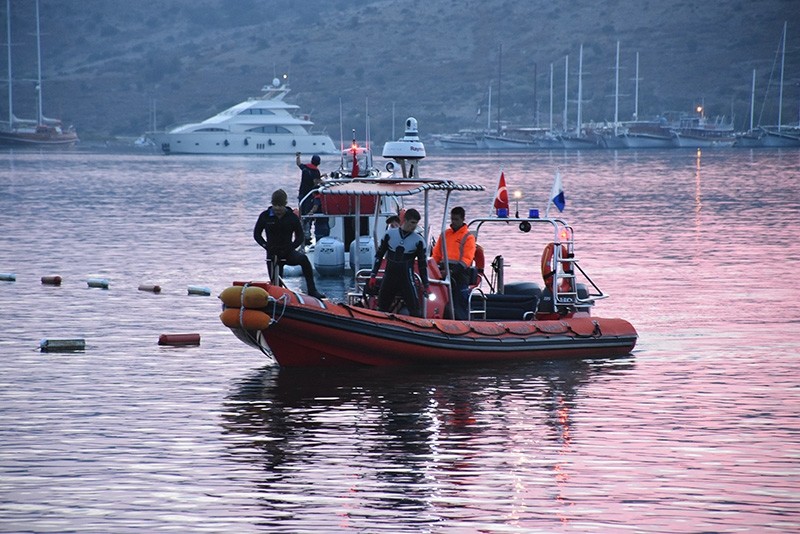 Two children died and 18 others were rescued after a boat carrying illegal migrants sank off the coast of Bodrum, a resort town in southwestern Turkey located near the Greek island of Kos.

The incident was the latest in a string of similar tragedies that claimed lives of migrants en route to Greece. Officials announced the boat was carrying 34 migrants. Some 14 others managed to swim to safety.

The migrants, whose nationalities could not be determined immediately, had boarded a 6-meter-long fiberglass boat minutes before it started sinking off the Gümbet beach in Bodrum. Hearing the screams of the migrants, local people alerted the police. Coast Guard crews reached the scene and took survivors to safety by boats. Two children, who were among the hospitalized, later died.

One of the victims was a seven-year-old girl who was not breathing when brought to the shore. A four-year-old, identified as Palestinian national Ihab Abujazar, survived after Coast Guard personnel performed a CPR.

The police launched an investigation into the incident and detained four suspects. Their identities were not revealed but are believed to be smugglers helping the migrants sneak out of Turkey and into Greece.

The boat carrying migrants had the capacity for 10 people. Witnesses said some aboard the boat fled after swimming to safety. The coast guard has launched an additional search in the area for potential survivors as there are conflicting accounts about how many people were actually aboard.

Fourteen illegal migrants from Somalia and Palestine who were found in an area near the scene told police they were also supposed to board the boat but they were not allowed to do so as it was "already overcrowded."

The incident comes only 12 days after a boat carrying migrants capsized off Karaburun, Izmir. Eight people were killed in that incident.

Connecting Asia to Europe, Turkey is no stranger to a continuous flow of migrants. The influx of illegal migrants, however, rose considerably in recent years due to the war in neighboring Syria, other conflicts around the world and poverty affecting underdeveloped countries.

Turkey's seas, particularly the Aegean in the west, saw a large influx recently with more migrants boarding dinghies to reach Europe. They travel in overcrowded and unsafe boats to reach Greek islands scattered across the Aegean and only a few kilometers away from Turkish shores. Deaths are common in crossings as many migrants, despite paying thousands of dollars to smugglers, are forced to travel in rubber boats. Though the boats are good for short journeys, they often operate way above their holding capacity, and more often than not, smugglers leave the steering to the migrants, inexperienced in navigating a crowded boat, and are forced to travel in bad weather, especially in winter.

Europe remains the closest chance for many to have a chance at a better life, although far-right movements in European Union countries have gained momentum in mainstream politics and measures to stop the migrant flow have increasingly tightened.

In March 2016, the EU and Turkey reached an agreement to stop irregular migration through the Aegean Sea, and improve the conditions of more than 3 million Syrian refugees in Turkey. An exchange program that would return migrants that previously entered Europe to Turkey and settle Syrian refugees in EU countries failed to curb the migrant flow, as the high number of illegal migrants intercepted by Turkey indicates.

At least 376 illegal migrants were held across Turkey yesterday alone, from Kırklareli in the north that connects Turkey to Bulgaria to the eastern province of Van which borders with Iran and is a popular crossing point for migrants from Afghanistan.

Numbers provided by Turkish Coast Guard Directorate shows 20,320 illegal migrants – formally referred to as irregular – were intercepted in the Aegean Sea which Bodrum is situated on, between January and Oct. 22. Fifty-six people perished in the same period after their boats sank. Security forces also captured 42 smugglers between January and October 2018.