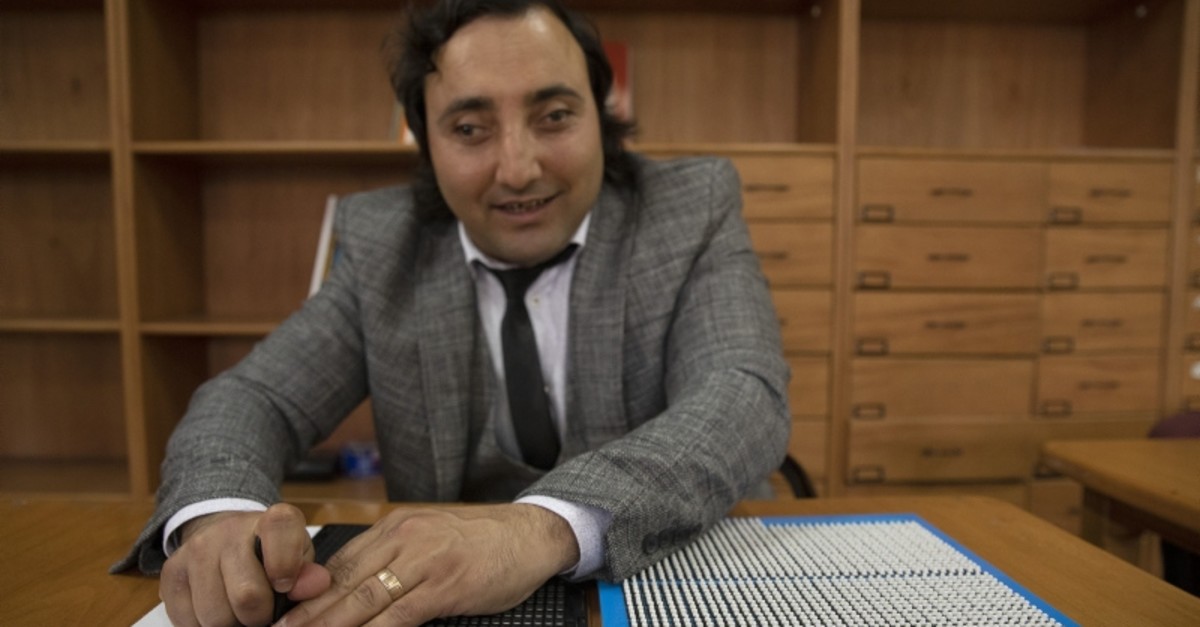 A blind Turkish man has developed a special tool for visually-impaired and blind people to help them learn mathematics and geometry more easily and do sums without relying purely on their memories.

Oğuz Karadağ had always dreamed of becoming a mechanical engineer but could not fulfill his dream since it was too hard to do mathematics and geometry with a standard Braille alphabet on inadequate devices designed for the visually-impaired. However, despite this obstacle, he managed to get a top spot in Boğaziçi University, one of the most prestigious universities in Turkey, to study psychological counseling and guidance — and with an impressive rank of 54th in Turkey. He said he got the idea for the device while working as a counselor at a high school in Istanbul.

The 33-year-old told Anadolu Agency that his invention would change the way mathematics and geometry was learned and eliminate problems that cause the visually-impaired to be exempt from mathematics and geometry classes. Karadağ said today's devices for the visually impaired were only for drawing shapes like circles and triangles, and didn't allow them to do further operations on the shapes.

Karadağ said that he initially designed the device in 2009 but received a patent for his invention from Turkey two years ago, and this year from the United States, adding that his only dream now is for "the device to be mass produced and used all over the world."

Karadağ said that there were many problems regarding the current devices, such as not being able to correct their mistakes, delete steps or numbers after they have started doing the arithmetic operation, not being able to trace their steps back and having have to remember them all, and even having to cope with the device changing the numbers, and hence the whole value of the sum, when they press too hard on the screen.

He said that most of the time, the blind have to restart their tablets at least seven times to solve a simple equation, all the while keeping all the variables, numbers and steps in their minds since they don't see them, which causes them to lose time. These devices also only give the opportunity to touch the numbers once the whole equation is over or solved. Karadağ said his tool will give them the chance to touch the numbers while solving the equation and thus earn them extra time.

Karadağ said that his design will also enable its user to erase or correct mistakes during the operation.

"The most a visually impaired person can do is solve an equation with two variables, and that's where their intelligence ends. That's why there aren't any visually-impaired engineers," he noted.

"Engineers who are not visually impaired end up creating devices for us," Karadağ said, but underlined that this was very difficult as they often cannot comprehend how the visually-impaired think when doing such operations.

Even though his brother had always been with him when he prepared for university entrance exams or while he was studying at university, Karadağ pointed out that even his brother can't fully grasp the demands and needs of a visually-impaired person.