Volunteers seek to quench thirst in Nigeria with wells 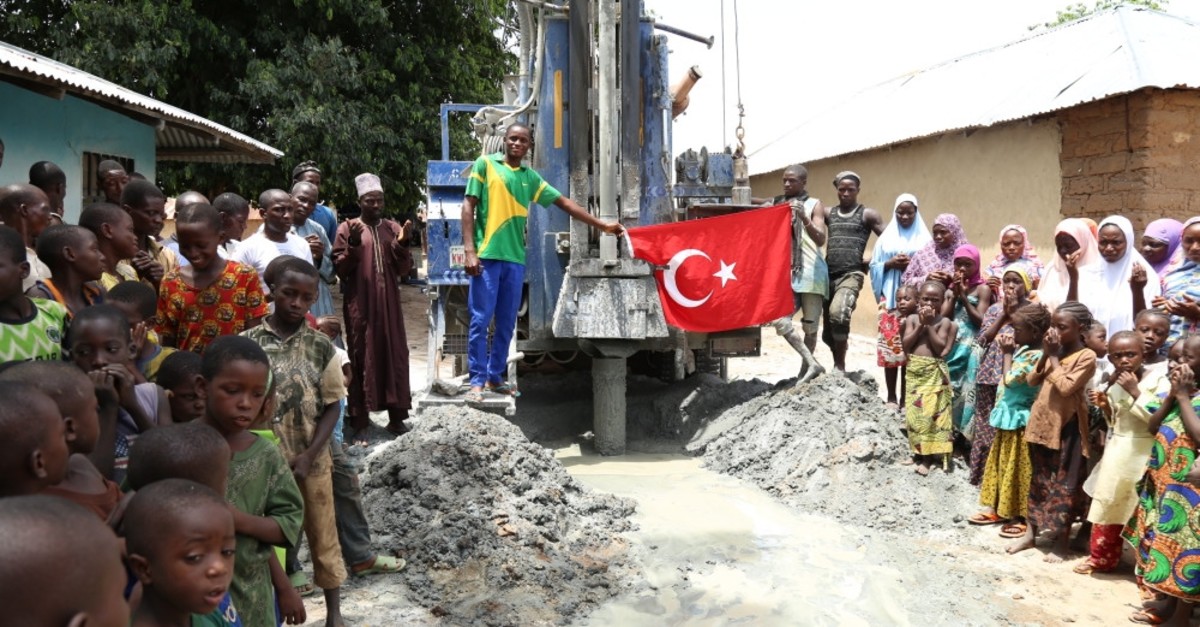 In Nigeria, a country grappling with water shortages in rural areas and the lack of access to clean water, Turkey-based charities offer lifelines to thousands. Volunteers have reached out everywhere, including to schools, villages, mosques and refugee camps, in the African country, crossing through rough terrain in remote areas to help the needy.

Adamder, the Aziz Mahmut Hüdayi Foundation, the Beşir Association and the Turkish Diyanet Foundation (TDV), which is associated with Turkey's state-run religious authority, and the Bir El Association are among the charities that have contributed to the installation of more than 300 water wells across Nigeria.

Fatih Emin Danışan of the Adamder Association, which has been active in the country since 2010, says that along with education and humanitarian aid, they helped Nigerians access clean water, especially those in rural regions affected by water shortages. "Our charity has so far installed 127 water wells. Like other Turkish volunteers, we seek to address to their clean water needs, but it is not enough," Danışan told Anadolu Agency (AA).

Nigeria basically has two seasons in a year, with six months of sporadic rainfall and six months of a lengthy dry spell. In areas without water treatment plants or any source of clean water, people resort to muddy waters containing moss and use it as drinking water. Alum stones, a potassium-rich rock which is historically used to clarify muddy waters, is the only option for villagers in a country of 200 million people with an insufficient water network. Locals head to ponds to collect muddy and mossy water every day and after cleaning it, they store the water in clay pots. Zuwaira Suleiman is one of the women who has to visit a nearby pond every day for water. She says the pond is their only water source. "We have to bring water home every day and clean it there with alum stones. Cleaning it is the toughest part. You have to do it in small batches. We later boil the water, so it can be purified thoroughly," Suleiman tells AA. Using the alum stone was something she learned from her grandparents, she says.

Adamder installed its 127th water well in the Kwali region yesterday in a village without clean water. "Villagers have to walk for about 700 meters every day to carry water to the village. This water well will give them absolutely clean water and save them from walking," Danışan says. However, he continues to call on donors to donate for the water wells, which cost about $2,500.

Suleiman Mai Unguwa, a local, says they are thankful to the Turkish charity for ending their water problem. He said they will share the clean water from the well with other villages in their immediate vicinity.

"After electricity, having clean water is the most problematic thing for us," Unguwa says. "We try to collect rainwater in the rainy season, but we have to take water from ponds in the dry season," he says. Though they clarify the water, Unguwa says it is still dangerous to drink, and there have been cases of diarrhea and typhoid among locals drinking the muddy water.

In a world where more than 2 billion people still lack access to clean water, Turkish charities have opened water wells all over Africa, Asia and the Middle East. Ten Turkish charities have established more than 8,800 water wells around the world so far. The Humanitarian Relief Foundation (İHH) opened more than 3,400 water wells in 30 countries, the Cansuyu Charity and Solidarity Organization opened more than 1,270 water wells in 13 countries; while the Yardımeli International Humanitarian Aid Agency opened more than 1,100 wells in seven countries, and the Hayrat Aid Foundation opened 872 wells in 17 countries. The Turkish Cooperation and Coordination Agency (TİKA) has put over 500 water wells into operation in five years and also realized several projects in Azerbaijan, Ecuador, Sudan, Cambodia, Niger and Tunisia, which support sustainable development and provide millions with water, along with water for fertile soil.

Wells are most needed in Africa, which is home to 11 percent of the world's water reserves though figures show water consumption per person is 10 liters in the continent. People in mostly rural areas have to travel up to 6 kilometers to access clean water. Apart from the usual health and hygiene problems, water shortages also create an indirect challenge to education. Children are often responsible for fetching water for their families and have to walk kilometers every day to find water in streams and ponds. The unclean water they fetch from these sources leads to the spread of waterborne diseases.