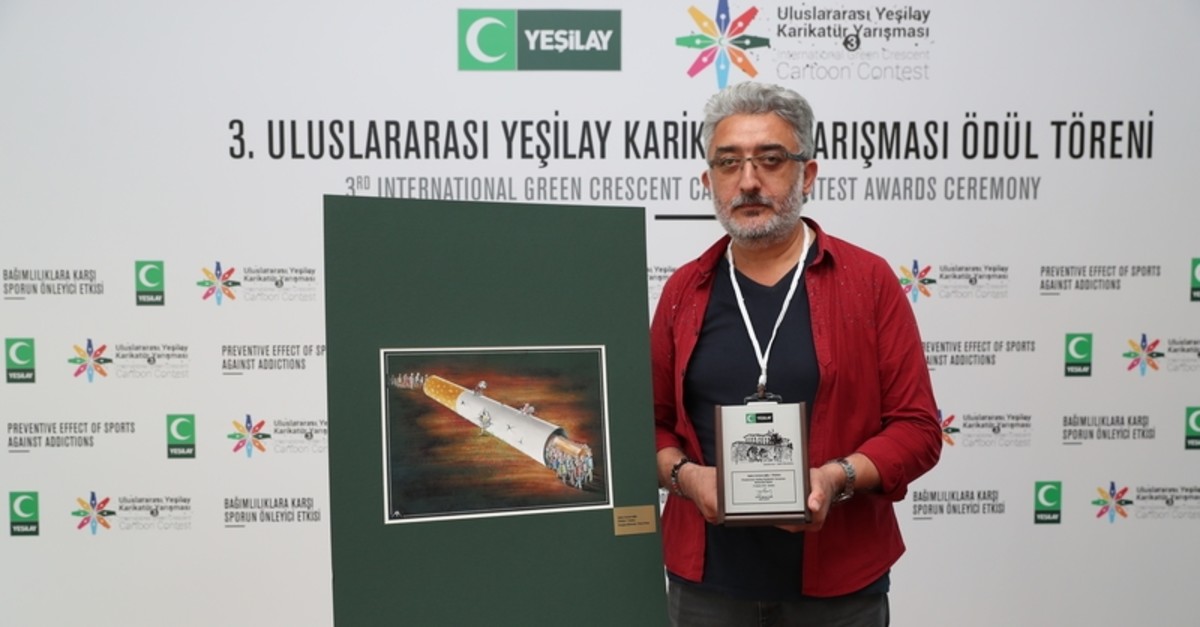 The Green Crescent has organized the Third International Green Cartoon Contest to raise and create awareness in Turkey and across the world, especially among young people, against the problem of addiction. The event, which is held under the theme of the "Preventive Effect of Sports against Addictions," gave out awards that were presented to the winners at a ceremony organized in the General Center of the Green Crescent on June 21.

A total of 414 cartoonists from 51 countries took part in the competition with 787 works. The grand prize went to Aşkın Ayrancıoğlu from Turkey. Other distinguished prizes were given to Brady Izquierdo Rodriguez from Cuba, Amir Khaleghi from Iran, Satılmış Akın from Turkey, Claudio Antonio Gomez from Brazil and Khodayar Naroei from Iran. The jury for the contest included the Green Crescent Chairman of the Scientific Committee and Istanbul Şehir University Chancellor professor Peyami Çelikcan, President of the Association of Cartoonists Metin Peker, cartoonists Şevket Yalaz, Özcan Çalışkan and Borislav Stankovic, who was last year's grand award winner and also the guest of honor.

Speaking at the award ceremony, professor Çelikcan said that some new changes were added to the format of the contest this year. The competition, which was first organized in 2017, was limited to the subject of the effects of sports on addiction this year. Noting that they will continue to limit the parameters of the contest with similar themes in coming years, Çelikcan stressed that the award categories of the contest will also change over time. He explained: "The winner is granted a grand award while five other success awards will also be given in our contest. However, there will also be prizes for the second and third place winners starting from next year. We are also planning to have a special prize on behalf of professor Dr. Mazhar Özkan, the founder of the Green Crescent."

The contest drew great attention from around the world. More importantly, the contest highlighted one more time that sports and an active life have great preventive power and influence for avoiding addictive substances. By understanding that sports and an active life are of great importance for us to live happier and healthier lives, we can help ensure that individuals, society and future generations can avoid the problem of addiction.