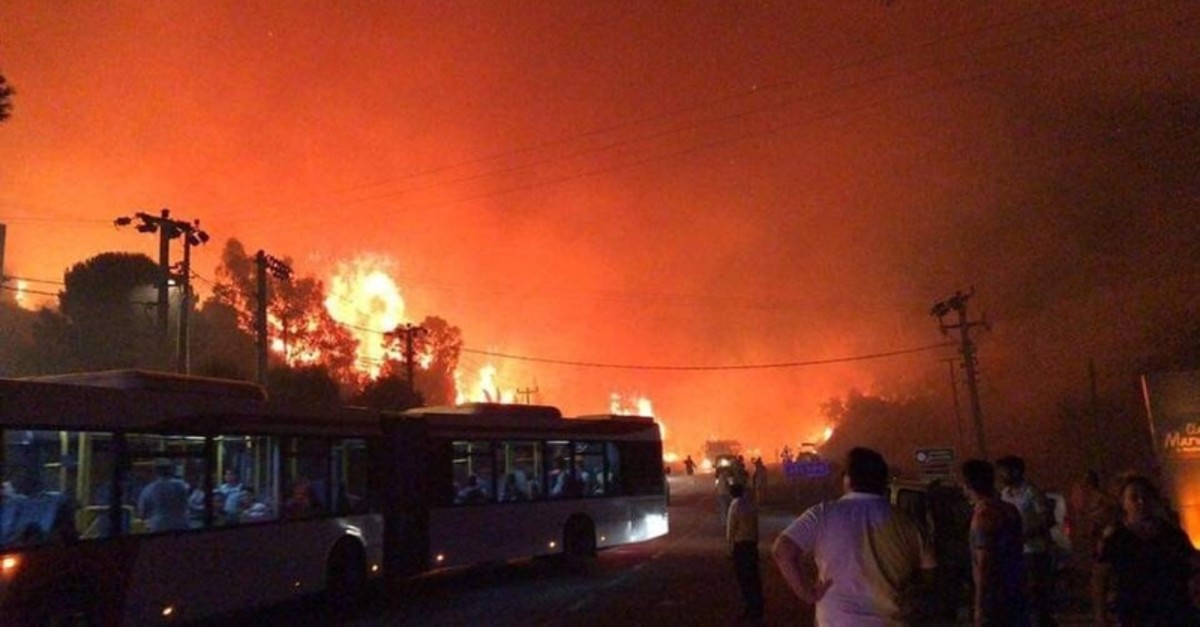 Crews of firefighters are working to contain blazes that have broken out in grassy or forested areas of southern Antalya province and western Izmir province.

In the Serik district, 38 kilometers (24 miles) east of the Mediterranean resort city of Antalya, firefighter crews aided by four helicopters and 12 firetrucks from the regional Directorate of Forestry managed to contain a forest fire that broke out Sunday evening.

The fire consumed one house, a barn, a tractor and trailer and 85 olive trees on one man's property before destroying a plastic greenhouse on an adjacent property, according to Anadolu Agency.

Şimşek said stubble fires broke out at seven different locations in the district on Sunday evening, warning residents not to burn stubble amid high risk of wildfires.

In Izmir's Menderes district, a fire broke out Sunday night in a grassy area near the Aegean coast and quickly spread due to windy conditions.

The cause of the blaze, which broke out in the Özdere Cumhuriyet neighborhood, remains unknown.

Local municipality teams were joined by crews from the regional forest directorate and Izmir Metropolitan Municipality using 17 firetrucks and five bulldozers to help contain the blaze.

Authorities warned that the fire could grow in size.

Windy conditions blew smoke from the fire toward the sea, prompting some hotels to evacuate guests.

Menderes Mayor Mustafa Kayalar said Sunday evening that two hotels had been evacuated and the Gümüldür and Ahmetbeyli roads had been closed off to traffic.

"We hope we can get the fire under control as soon as possible," he told reporters.

On Sunday, fire crews contained a blaze that broke out in a shrubby area of Izmir's Dikili region near summer homes.

Turkey's southwestern coast, popular among summer vacationers who flock to its beaches and seaside resorts, has been hit by a heatwave that enveloped Turkey and Europe over the past week. In parts of western Aydın province, located just south of Izmir province, temperatures hit 43 degrees Celsius (109 degrees Fahrenheit) on Tuesday. In Antalya, highs reached 40 degrees last week.