More than 4,100 illegal migrants stopped in one week 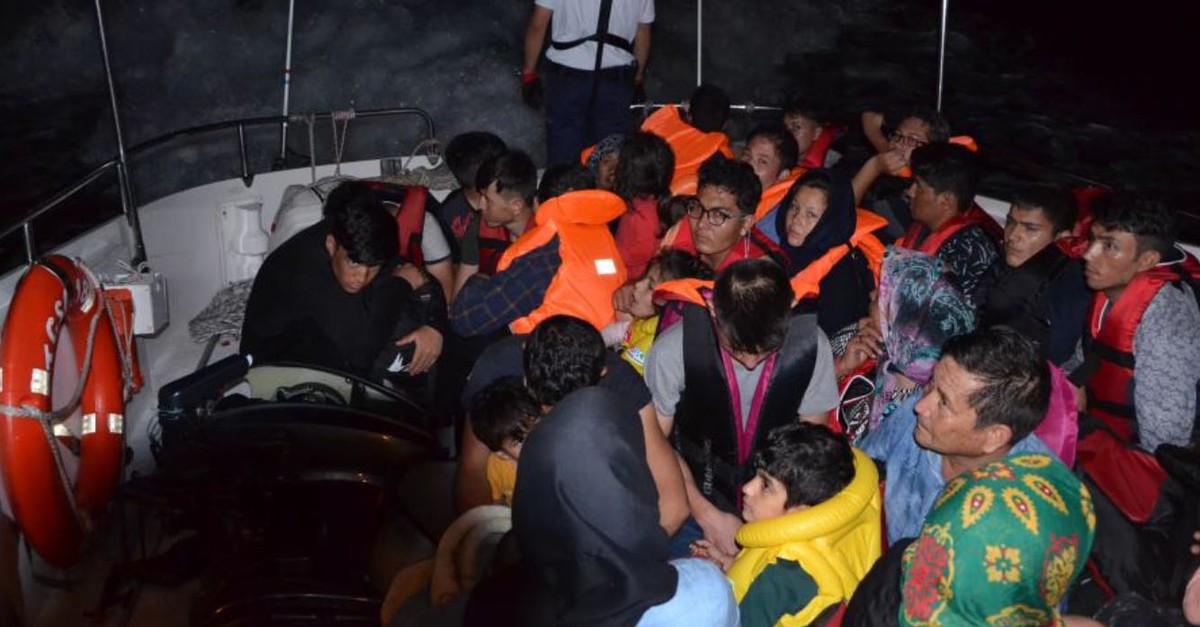 At least 4,195 illegal migrants were intercepted last week across Turkey as the country strives to stop deadly journeys into Europe

In the coastal provinces of Çanakkale, Balıkesir, Aydın, İzmir and Muğla, Coast Guard Command and gendarmerie rounded up a total of 1,621 migrants trying to cross over to Europe through Greece via the Aegean Sea. During the week, a total of 55 people were arrested for alleged human smuggling. In the eastern Van province, which borders Iran, a total of 530 migrants were stopped by gendarmerie and border forces. Some 20 migrants were also held by police in Istanbul.

In the central Anatolian province Sivas, gendarmerie forces intercepted 15 migrants. Separately, three migrants were held by security forces in the southern province of Osmaniye. The migrants included Pakistani, Moroccan, Syrian, Iraqi, Afghan, Egyptian and Bangladeshi nationals. All held during the week were either taken to hospitals for medical care or transferred to provincial migration offices.

In 2018, some 268,000 illegal migrants were held in Turkey, according to the Interior Ministry.

Turkey has been a key transit point for illegal migrants aiming to cross into Europe to start new lives, especially those fleeing war and persecution. However, journeys aboard unsafe, overcrowded boats often steered by inexperienced migrants regularly turn fatal. According to figures provided by Coast Guard Command, 28 people died when boats carrying migrants sank off Turkey's Aegean coast between January and June this year.

Illegal migration has been a priority for Ankara in recent years, especially after the conflict in neighboring Syria forced more than 3.5 million people from the country to take shelter in Turkey. Including Syrians, Turkey hosts about 5 million migrants and more than 1 million migrants live in Istanbul, the country's most populated city. Speaking to journalists on Saturday, Interior Minister Süleyman Soylu said migration remains the most important issue to be addressed in the 21st century and Turkey's location has forced it to prioritize the issue. He said they particularly did not expect an end to the flow of migrants from Afghanistan and Pakistan. "We live in a transit country and a country loved by migrants arriving here. We are like brothers and sisters to Afghans, Iraqis, Pakistanis and Syrians because of centuries of sharing a religion, culture and brotherhood. Yet, this is exploited by human smugglers, and it is our duty to take measures," he said.

Soylu said 152,000 illegal migrants have been stopped by security forces since January, and Turkey was exerting enormous efforts to stop illegal migration. The minister noted it succeeded somewhat, pointing out that the number of people crossing into Greece via Turkish seas dropped to about 75 daily from 9,000 a few years ago. "We stop more than 75 every day as they try to cross into Greece. We also pursue serious cooperation with countries migrants originated from to stop this illegal migration," he said.

The interior minister said they also apprehended about 10,000 human smugglers in two years and considered heftier prison terms for smugglers to deter smuggling.