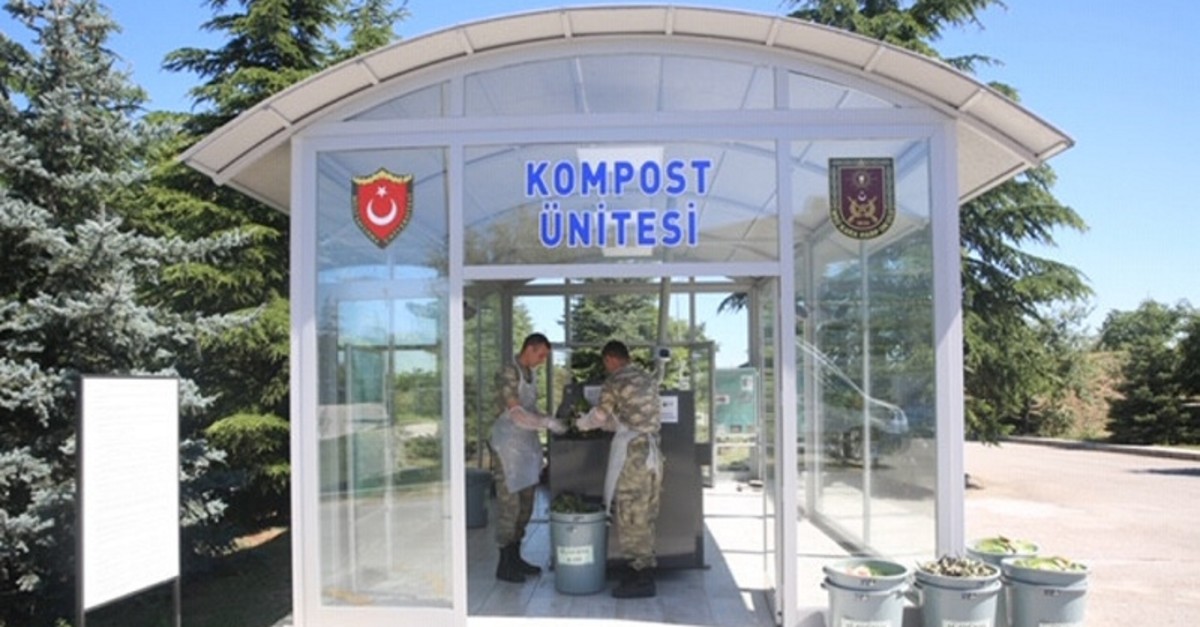 Soldiers dispose of waste at the compost unit in this undated photo provided by the Ministry of National Defense
by Daily Sabah Jul 18, 2019 12:08 pm

"Area cleaning," as it is called in military jargon, is every conscript's traditional duty in the Turkish Armed Forces (TSK), and soldiers adhere to a morning routine of cleaning almost every square meter of military bases they are stationed at. Turkey's ambitious zero waste project aims to make the garbage picking job an effective, energy-saving and profit-generating task.

Around 40,000 Turkish soldiers have received training as part of the "Zero Waste Program" initiated by First Lady Emine Erdoğan, while the new waste regulation system has been integrated into all military units, the Ministry of National Defense said Thursday.

The project championed by the First Lady and supported by Şule Akar, the wife of Defense Minister Hulusi Akar at a ministrerial level, has taken off with the creation of temporary waste storage spaces, where garbage will be stored to be handed to authorized firms and municipalities to be sorted into paper, plastic, glass and metal for recycling.

The ministry has also prepared an exclusive film and published a guide promoting the zero-waste policy.

Compost machines have also been installed in the General Staff Headquarters, the Land Forces Communications Electronics and Informatics School and Training Center Command, the Turkish Military Academy, and more.

Waste from uncooked food leftovers is disposed of in these machines to be turned into organic fertilizers, which will then be used to boost the soil on the National Defense Ministry's campuses.

Some 20 tons of compost have been produced in the past six months, according to the ministry.

Besides the recycling initiative, the Zero Waste Project also aims to create healthy and sustainable dietary habits and provides training in this aspect.