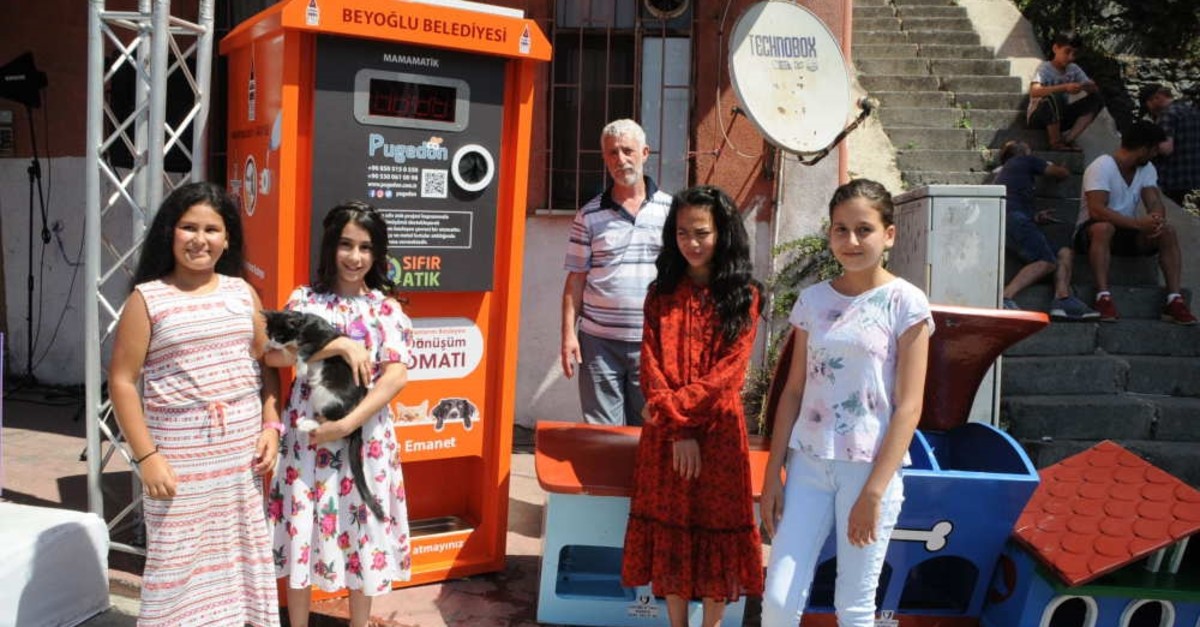 A 12-year-old girl's dream to keep stray dogs and cats in her neighborhood fed came true thanks to a unique project in Istanbul's Beyoğlu district.

Melek Büşra Aykut's photos now adorn "Patimatik" or "Pawmatic," automated food dispensers for stray animals, a common sight in the district and across the city. It is a win-win for the environmentally conscious as well since the dispensers give out food in exchange for discarded plastic bottles.

Aykut joined Beyoğlu Mayor Haydar Ali Yıldız yesterday to promote the dispensers set up in the Kızılay, Çıksalın, Kalaycıbahçe and Cihangir neighborhoods as well as a square where Istanbul's iconic Galata Tower is located. Together with the mayor, the young girl introduced the dispensers, which were first placed at her neighborhood.

The girl met with mayoral candidate Yıldız before the March 31 municipality elections to talk about her ideas for feeding stray animals, including creating cavities in sidewalks for food and water for animals and developing automated machines to feed them. Yıldız made good on his promise after his election victory and named the project to feed animals after the young girl. The municipality, in cooperation with a private company, developed Patimatiks.

Speaking at the launch of the dispensers, the mayor said Aykut was a little girl with a big heart, and it was one of his first tasks in office after his election to fulfill her dreams. "We want to lead the efforts for a more environment-friendly, animal-friendly city. This is Büşra's brainchild, and she will now be a renowned name in Beyoğlu. I hope this project will spread to other districts and cities," he said. "I love animals very much, and this is how I came up with this idea," Aykut said at the launch. "They need to eat and drink water as much as we do," she said. The girl said she used to leave bowls of water on sidewalks for thirsty animals and was happy to see her dream to feed all the animals in Beyoğlu come true. She said she hoped that the project would set an example for others to help animals.